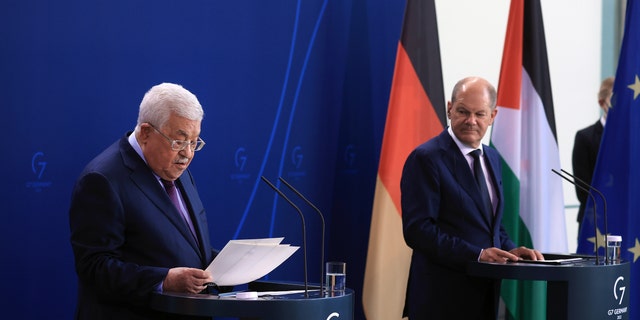 JERUSALEM, Israel – The president of the Palestinian Authority, Mahmoud Abbas, issued a shocking tirade against Israel on Tuesday in the German capital of Berlin, where the Holocaust – the mass extermination of European Jewry – was organized, claiming the Jewish state carried out “50 Holocausts.”

German Chancellor Olaf Scholz is under intense fire for not objecting to Abbas’ distortion of the Holocaust during a joint press conference in the Chancellery, where the Palestinian leader made his comments.

When Abbas was asked if he plans to apologize and aid in an inquiry of the Palestinian Black September massacre of 11 Israeli athletes and a German police officer during the 1972 Munich Olympics, he said: “If we want to dig further into the past, yes, please, I have 50 massacres that were committed by Israel. Which were also recorded in documentaries … 50 massacres, 50 Holocausts, and to this day, every day, we have dead people killed by the [Israeli Defense Forces], by the Israeli army.”

Rabbi Abraham Cooper, the associate dean of the Los Angeles-based Jewish human rights organization the Simon Wiesenthal Center, told Fox News Digital that Scholz must impose consequences for Abbas’ “nefarious trivialization of the Shoah [Holocaust]. Hold Abbas and his corrupt PA accountable! Silence is admittance. We await your actions not only delayed words.”

Mahmoud Abbas and Olaf Scholz during a news conference in Berlin, Germany, on Tuesday, Aug. 16, 2022. (Krisztian Bocsi/Bloomberg via Getty Images)

Friedrich Merz, leader of the opposition Christian Democrats (CDU), tweeted on Tuesday: “An unbelievable event in the Chancellery. The chancellor should have contradicted the Palestinian president in no uncertain terms and should have asked him to leave the house!.”

Abbas’ playing down of the Holocaust and Scholz’s indifference to the Palestinian leader’s Holocaust revisionism unleashed a storm of outrage and criticism.

Israeli Prime Minister Yair Lapid on Tuesday said on Twitter, “Mahmoud Abbas accusing Israel of having committed ’50 Holocausts’ while standing on German soil is not only a moral disgrace, but a monstrous lie.” Lapid, whose father, Tommy, survived the Holocaust, added, “History will never forgive him [Abbas].”

After ballooning criticism against the Social Democratic Party’s Scholz, he tweeted on Wednesday, “I am disgusted by the outrageous remarks made by Palestinian President Mahmoud #Abbas. For us Germans in particular, any relativization of the singularity of the Holocaust is intolerable and unacceptable. I condemn any attempt to deny the crimes of the Holocaust.”

Abbas sought to walk back his comments. He issued a statement terming the Holocaust the “most heinous crime in modern human history.” He added that he wanted to shine a light on the “crimes and massacres committed against the Palestinian people since the Nakba at the hands of the Israeli forces.”

The Palestinians invoke the term Nakba to label their alleged expulsion from their homes during Israel’s 1948 war of independence against Arab states.

The Bild cited Abbas’ 1982 dissertation, “The Other Side: the Secret Relationship Between Nazism and Zionism,” in which Abbas argued Zionists seeking to build the state of Israel formed an alliance with Nazis to stimulate immigration to then British-controlled Palestine. Abbas also cast doubt on the existence of gas chambers in Nazi extermination camps that murdered Jews.

Researchers have claimed that he put a question mark over the number of six million Jews killed during the Holocaust, sparking accusations that Abbas engaged in the denial of the Holocaust.

LAST OF SOVIET SOLDIERS WHO LIBERATED AUSCHWITZ DIES AT 98

Historians and Middle East experts have debunked Abbas’ dissertation, which he has not explicitly rejected. The Lebanese-born scholar of the Middle East Dr. Edy Cohen accused Abbas in 2017 of being a “Holocaust denier.” Cohen is an Israeli specialist who has extensively analyzed Arab antisemitism in the region.

Olaf Scholz and Mahmoud Abbas arrive for a news conference in Berlin on Tuesday, Aug. 16, 2022. (Krisztian Bocsi/Bloomberg via Getty Images)

The president of the German Jewish community, Josef Schuster, slammed Scholz, declaring, “I think it is scandalous that a relativization of the Holocaust, especially in Germany, at a press conference in the Federal Chancellery, goes unchallenged.”

In 2019, the German commissioner Michael Blume, who is assigned to fight antisemitsim in the southern state of Baden-Württemberg, compared the German-Jewish activist Malca Goldstein-Wolf with the Nazi mass murderer Adolf Eichmann. The Simon Wiesenthal Center’s top Nazi-hunter Efraim Zuroff  urged Blume to apologize to Goldstein-Wolf and resign.

Ali Larijani, the  former president of the Iranian regime’s parliament, said at the 2009 Munich Security Conference that his country has “different perspectives on the Holocaust.” Germany outlaws Holocaust denial but took no legal action against Larijani.

In 2008, as head of the Iranian regime’s “human-rights council,” Mohammad Larijani, the brother of Ali, denied the Holocaust during a German Foreign Ministry-sponsored event close to Berlin’s Holocaust memorial. He also called for Israel’s destruction. The German government did not penalize Mohammad Larijani for his Holocaust denial.

Beeliever - September 24, 2022 0
Christian hip-hop artist Dusty Marshall releases his lead single, My God Too featuring Illuminate and Jenisis Praise from his new album Beauty in the...
Go to mobile version