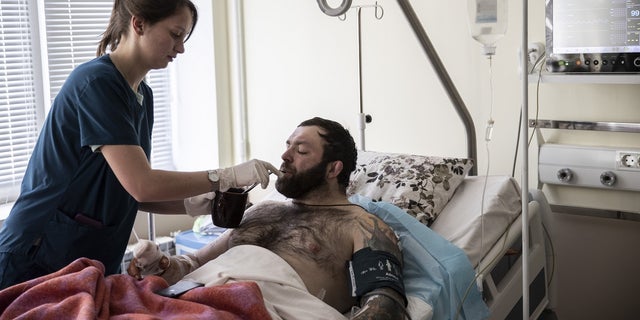 Over 3,700 civilians have been killed in Ukraine since Russia’s military invaded the country on Feb. 24, according to the United Nations.

On Tuesday, the Office of the UN High Commissioner for Human Rights (OHCHR) said the total number of civilian casualties in the war exceeds 7,814. That includes 3,752 civilians killed and another 4,062 injured in a war that has spread across Ukraine, from Odesa in the South to Kyiv in the North.

The OHCHR said the actual totals are expected to be “considerably higher” than the confirmed totals as Russia‘s military continues to occupy much of Ukraine’s Eastern cities and intense fighting is still ongoing.

KYIV, UKRAINE – MARCH 18: A soldier injured due to Russian attacks on Ukraine gets treatment in Kyiv, Ukraine on March 18, 2022.
(Photo by Emin Sansar/Anadolu Agency via Getty Images)

“All sources and information are assessed for their relevance and credibility and cross-checked against other information. This may mean that conclusions on civilian casualties may be revised as more information becomes available and numbers may change as new information emerges over time,” the report added.

The agency believes the actual figures are considerably higher than the confirmed numbers.

Most of the recorded casualties were caused by explosive weapons with a wide impact area, including shelling from heavy artillery and multiple launch rocket systems, the agency wrote.

RUSSIA IS ‘BANKRUPT,’ UNABLE TO WIN AND FACING A ‘DEAD END’ IN THE WAR: ZELENSKYY

Families wait to board a train at Kramatorsk central station as they flee the eastern city of Kramatorsk, in the Donbas region, in early April.
(Photo by FADEL SENNA/AFP via Getty Images)

The human rights report also relies on collaboration with local government agencies, since the UN Human Rights Monitoring Mission in Ukraine (HRMMU), which has monitored civilian deaths in the country since 2014, has been unable “to interview victims and witnesses” in some areas.

Most of the deaths and injuries were recorded in the Donetsk and Luhansk regions — where most of the fighting has taken place — with 2,050 confirmed deaths and 2,140 reported injuries, OHCHR reported.

Gravedigger Alexander, digs a grave at the cemetery of Irpin, on the outskirts of Kyiv, on Wednesday, April 27, 2022.
((AP Photo/Emilio Morenatti))

Russia’s indiscriminate bombings and air assaults on civilian locations reportedly caused most of the casualties.