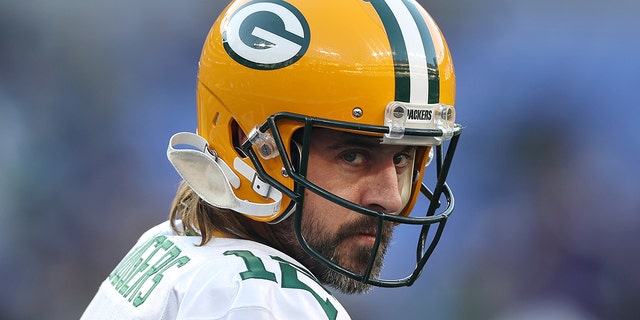 Aaron Rodgers and the Green Bay Packers have been on the brink of a Super Bowl appearance the last three seasons but can’t seem to break through.

Despite missing one game last season, Rodgers earned his second straight NFL MVP award and fourth overall. He threw for 37 touchdown passes and 4,115 yards with only four interceptions. He hasn’t thrown double-digit interceptions since 2010.

Quarterback Aaron Rodgers of the Green Bay Packers warms up against the Baltimore Ravens at M and T Bank Stadium Dec. 19, 2021, in Baltimore.
(Rob Carr/Getty Images)

The Packers are among the favorites to contend for a Super Bowl in 2022. But the team’s construction is much different from last season.

Rodgers will have to work with new offensive weapons, including rookie wide receiver Christian Watson and veteran Sammy Watkins.

Read below for three intriguing matchups for Rodgers and the Pack.

Rodgers vs. Tom Brady. What could be better? Brady could have easily been the NFL MVP last season after having one of his best years in recent memory, but Rodgers snagged the award. It will be a rematch of the 2020 NFC Championship at Raymond James Stadium at 4:25 p.m. Sept. 25 and can be seen on FOX.

Almost as intriguing as Rodgers vs. Brady will be Green Bay heading to Buffalo to play Josh Allen and the high-powered Bills. Rodgers will have to deal with the top-ranked Bills defense from a season ago. Green Bay will have the challenge of defending Allen. This matchup is set for Sunday Oct. 30 at 8:20 p.m. ET on NBC.

The Packers-Rams matchup late in the season could be an NFC Championship preview. Matthew Stafford and the loaded Rams will be looking to be the first team since the New England Patriots in 2004-05 to win back-to-back Super Bowls, and Green Bay will look to throw a wrench into those plans. Rodgers will face a tough LA defense. The game is set for Monday, Dec. 19, at 8:15 p.m. ET in Green Bay.

Sci-Fi or Prophecy..Human Evolution or Revolution?