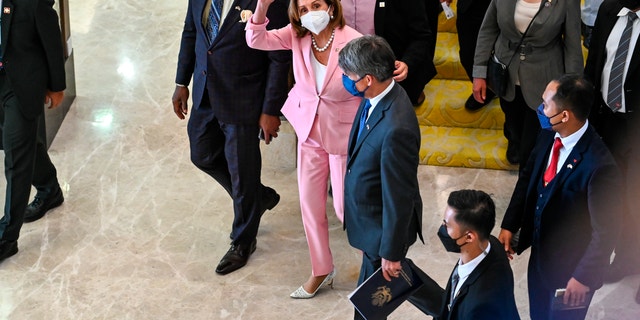 House Speaker Nancy Pelosi arrived in Malaysia Tuesday for the second leg of her Asian tour that is being overshadowed by an expected stop in Taiwan.

Pelosi and her delegation touched down at an air force base in Kuala Lumpur. She met with lower house Speaker Azhar Azizan Harun in Parliament and participated in a luncheon with Prime Minister Ismail Sabri Yaakob.

Pelosi issued a statement on her visit Tuesday, writing: “Today, our Congressional delegation was honored to be received by Prime Minister Ismail Sabri and Foreign Minister Saifuddin.  We engaged in wide-ranging discussion on advancing our shared goals for a free and secure Indo-Pacific.”

“In each of our meetings, we extended an appreciation for Malaysia’s vote at the United Nations on Russia’s aggression and their leadership in ASEAN on repudiating Burma for its deadly crackdown on dissent,” Pelosi said. “Our governance conversations centered on integrity in government, addressing the climate crisis and fighting COVID. We agreed to continue collaborating on our shared security interests, economic priorities, trade, human trafficking and climate issues.”

While there have been no official announcements, local media in Taiwan reported that Pelosi will arrive in Taipei on Tuesday night. She would become the highest-ranking elected U.S. official to visit in more than 25 years.

Word of Pelosi’s trip did not sit well with China, which views Taiwan as part of its territory and any trip by a high-ranking American official as confirmation of U.S. support for the Island’s independence.

China said its military will “never sit idly by” if Pelosi pushes ahead with the visit. China’s threats of retaliation have driven concerns of a new crisis in the Taiwan Strait, which separates the two sides, that could roil global markets and supply chains.

The White House said it will not encage with China’s “saber rattling.”

FOR CHINA’S MILITARY PLANNERS, TAIWAN IS NOT AN EASY ISLAND TO INVADE

“We shouldn’t be, as a country, we shouldn’t be intimidated by that rhetoric or those potential actions. This is an important trip for the speaker to be on, and we’re going to do whatever we can to support her,” Kirby told reporters.

“We always warmly welcome visits to our country by distinguished foreign guests,” he said.

Fox News’ Michael Lee and The Associated Press contributed to this report.

Lorraine Taylor is an editor at Fox News. News tips can be sent to lorraine.taylor@fox.com or on Twitter @LorraineEMT.

Israel has one of the lowest death rates from prostate