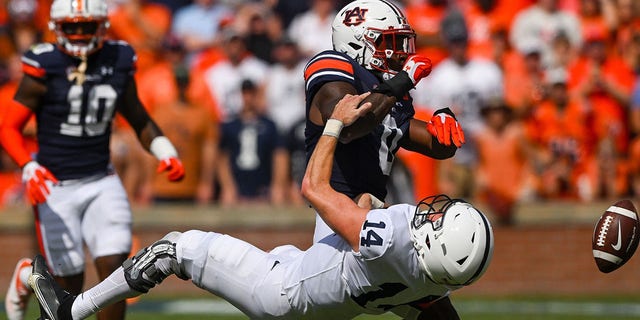 The hard hitters are out in Auburn Saturday.

Looking for an upset over No. 22 Penn State, the unranked Tigers wanted to set the tone early, and that’s exactly what they did.

On one of the Nittany Lions’ first plays of the game, quarterback Sean Clifford took a 3rd and 8 and scrambled to try to get the first down. But Auburn’s Owen Pappoe popped him hard, causing a fumble.

Penn State recovered, but the ball was short of the first down marker. On 4th and 1, Clifford tucked it for a sneak but was again stopped short by the Tigers, forcing a turnover on downs.

Clifford turned out to be just fine, though, and maybe even motivated after the big hit.

After Auburn converted a field goal after the turnover, Clifford drove the Lions 75 yards in their next drive and scored on a seven-yard rushing touchdown to give Penn State the lead.

Late in the second quarter, Clifford again drove the Lions down the field, and he also had a 25-yard reception on a trick play.

Kaytron Allen finished off the drive with a three-yard rushing score to give Penn State a 14-6 lead inside the two-minute warning.

Penn State quarterback Sean Clifford scrambles for yardage during the first half of a game against Auburn, Saturday, Sept. 17, 2022, in Auburn, Ala.
(AP Photo/Butch Dill)

Both the Lions and Tigers are 2-0. It’s the first time Auburn is hosting a Big 10 team, and the get-in price was at least $180, according to Outkick.