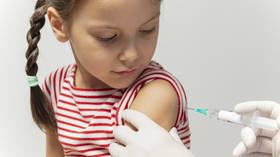 New York City and state health officials on Friday urged residents who haven’t been vaccinated against polio to do so, after the virus that causes the paralytic disease was detected in the largest US city’s sewage samples. The discovery comes just weeks after a confirmed case in a nearby county.

The finding suggests “likely local circulation of the virus.” Sewage samples from Rockland and Orange counties north of New York City also showed the presence of polio last month, followed by the discovery of the first domestic US polio infection since 1979.

State health commissioner Mary Bassett called the detection “alarming, but not surprising,” and added that the state department of health is “responding urgently, continuing case investigation and aggressively assessing spread,” in cooperation with local and federal partners.

“Polio is entirely preventable and its reappearance should be a call to action for all of us,” Vasan said. Vaccine clinics will be popping up to offer the inactivated polio vaccine (IPV) to residents.


Sewage samples from Orange and Rockland were “genetically linked” to the confirmed Rockland polio case, the Centers for Disease Control and Prevention (CDC) said after running a sequencing analysis. The man developed symptoms that included weakness and muscle paralysis.

The IPV became widely available in 1955 and the US officially declared the disease eradicated in 1979. All the infections found subsequently were among people who brought the virus from outside the country.

The 20-year-old patient was not vaccinated against polio, but the virus strain was identified as having been derived from a live vaccine. Authorities suspect the man was exposed to a person from a country where live vaccines are still in use, who was “shedding” the weakened virus. British authorities blamed this phenomenon for the discovery of polio in London sewage samples in June.

Two out of three strains of “wild” polio have been eradicated across much of the world thanks to an aggressive vaccination campaign. The last remaining strain remains endemic in Afghanistan and Pakistan.

Poliomyelitis is a life-threatening disease. In the worst cases, it can affect the brain and spinal cord, causing meningitis, paralysis and death.

Feds looking for up to 57 land acknowledgement plaques