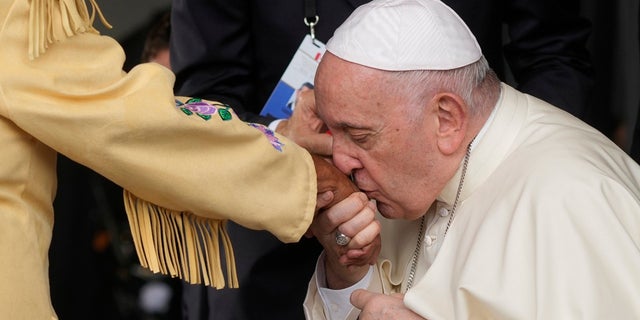 Pope Francis spoke before Indigenous people outside of Edmonton, Alberta, Canada, on Monday, apologizing on behalf of the Catholic Church for oppression and “forced assimilation,” and poor treatment of children at religious residential schools.

More than 150,000 Indigenous children were separated from their families and brought to residential schools between 1881 and 1996. A number of children were allegedly starved, beaten and sexually abused.

“I am sorry. I ask forgiveness, in particular, for the ways in which many members of the Church and of religious communities cooperated, not least through their indifference in projects of cultural destruction and forced assimilation promoted by the governments of that time, which culminated in the system of residential schools,” Pope Francis said.

Canadian leaders have been aware of the many children dying at the schools since 1907, but the incidents garnered more attention following last year’s discoveries of what appeared to be unmarked graves at or near former residential schools.

Canada’s Catholic Church says its dioceses and religious orders have provided more than $50 million in cash and in-kind contributions, and hope to add $30 million more over the next five years.

The Pope called his trip a “penitential pilgrimage.”

Pope Francis speaks as he meets the Indigenous communities, including First Nations, Metis and Inuit, at Our Lady of Seven Sorrows Catholic Church in Maskwacis, near Edmonton, Canada, Monday, July 25, 2022. (AP Photo/Gregorio Borgia)

“I have come to your native lands to tell you in person of my sorrow. To implore God’s forgiveness, healing and reconciliation. To express my closeness and to pray with you and for you,” he said.

Pope Francis leaves with Indigenous peoples after praying in a cemetery at the former residential school in Maskwacis, near Edmonton, Canada, Monday, July 25, 2022.
(AP Photo/Gregorio Borgia)

The Pope’s address took place on the grounds that once was home to the Ermineskin Indian Residential School but now has a school run by four local Cree nations.

Thousands of the tickets were reserved for Indigenous survivors of the residential schools. Indigenous leaders in Treaty 6, the location Francis is visiting in Alberta, have said they were overwhelmed with requests from survivors who wish to attend the event.

Fox News Landon Mion, The Associated Press and Reuters contributed to this report.