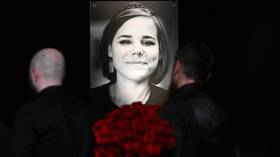 Pope Francis has denounced the killing of Russian journalist Darya Dugina, who died in a car bombing last Saturday. The head of the Catholic Church described Dugina as one of the many “innocents” who have suffered because of the conflict in Ukraine.

On Wednesday, Italy’s Agenzia Nazionale Stampa Associata media outlet reported that the Pope had prayed for Ukraine and for “so many innocents who are paying for the madness, the madness of all sides.” The pope has been quoted as proclaiming that “war is madness.”

According to the article, Pope Francis went on to refer to the murder of Darya Dugina, saying he thought “of the poor girl who was blown up by a bomb that was under the car seat in Moscow.”

“The innocent pay for the war,” he concluded.


Dugina was the daughter of Russian philosopher Aleksandr Dugin, a controversial thinker known for his advocacy of Russian exceptionalism, who, according to some media reports, may have some influence on the Russian leadership. While helping her father with his International Eurasian Movement, Dugina also gained some prominence as a journalist in her own right, contributing to, and appearing on, several Russian media outlets.

Both the late woman and her father were vocal supporters of Russia’s military offensive against Ukraine.

The car that the journalist was driving was blown up on August 20 outside of Moscow, with Dugina pronounced dead at the scene. The vehicle belonged to her father and, according to several media reports, he was supposed to accompany his daughter but at the last moment ended up taking a different car.

Days after the incident, the FSB, Russia’s domestic security agency, claimed that it had identified the assassin – a Ukrainian national named Natalya Vovk – who allegedly fled to Estonia soon after carrying out the attack.

Russian authorities accused the Ukrainian government of being behind the killing, something President Vladimir Zelensky has vehemently denied.

On Wednesday, Russian Foreign Minister Sergey Lavrov warned that Moscow would show no mercy toward the “organizers, the middlemen and the executors” of the bombing.