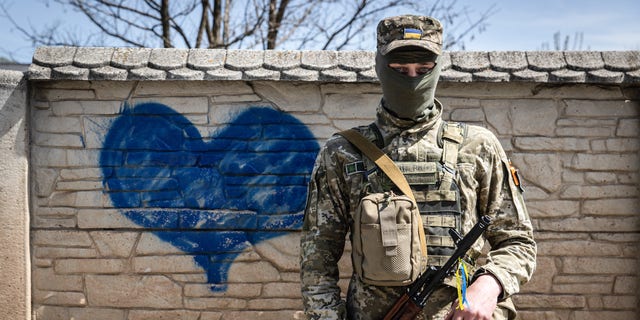 The manifestations of protests in Russia are becoming more and more creative.

Banksy-like drawings on asphalt in Akademgorodok, the educational and scientific center of Siberia, appear to represent bodies from Bucha, Ukraine, where massacres of civilians recently took place.

The figures drawn by a stealth graffiti artist have their hands tied behind their backs as many of the dead in Bucha did.

A Ukrainian soldier poses for a photo in front of a wall of heart graffiti during his patrol in an undisclosed location in Kharkiv oblast.
(Alex Chan Tsz Yuk/SOPA Images/LightRocket via Getty Images)

There have been Molotov cocktail attacks on recruiting stations and police cars.

A forty-year-old woman in Yekaterinburg who said she had never before been interested in or active in politics sewed her mouth shut and stood out on the street in a busy shopping district with a sign that said, “We cannot remain silent.”

Nadezhda Sayfutdinova lasted an hour before she was carted off. Before that, she said, many approached and hugged her. Police tried to get Sayfutdinova committed to a psychiatric hospital. Perhaps the fact she is a single mother got her off the hook — for now.  She wonders and worries about what will happen next.

Russian entrepreneur Evgeny Chichvarkin was one of the country’s richest young men and feted for his business savvy years ago before he escaped facedown on the floor of a car.

The state had put the squeeze on him and apparently tried to shake Chichvarkin down. He now owns a deluxe wine store called Hedonism in London but is active in the opposition politics of Russia.

He helped fund Alexei Navalny during his post-poisoning convalescence in Germany and is currently organizing shipments of medical aid to Ukraine. I asked Chichvarkin if these single-person demonstrations like Sayfutdinova’s happening in lieu of mass protests are making a difference in Russia.  He is rather pessimistic about the prospects for change.

“Nothing will affect Putin. We can see what he’s afraid of,” Chichvarkin told Fox News. “He’s really afraid of an oil and gas embargo. But he believes it will never happen. And we know from yesterday he is a bit worried about upsetting Israel.”

Part of the ongoing discussion about what could make Russian President Vladimir Putin stop this war is the issue of fallen soldiers and how society will eventually react to a rising death toll that is likely now well into the thousands. There has been a rising anger about Moscow’s refusal to admit to casualties on the battleship Moscow that sank in the Black Sea last month.

Ukraine said it destroyed the ship with a missile. The Russian military says there was simply a fire on board. Dozens are believed to have been killed. One father just shared the cold message he got from his son’s military commanders online that referred to a “ship that died” but a sailor who was just inexplicably missing. Human rights groups are working to compile lists of the dead.

BIDEN REQUESTS $33B FROM CONGRESS FOR UKRAINE EMERGENCY SUPPLEMENTAL FUNDING

Meanwhile, acts of sabotage on the railways of both Russia and Belarus are being carried out by shadowy groups. One called “Stop the Wagons” recently posted a map on social media of the regions in Russia it is targeting for action to impede the movement of fuel and materials to Ukraine via railroad. The chat group involves tips on ways to disable trains.

A Ukrainian soldier poses for a photo in front of a wall of heart graffiti during his patrol in an undisclosed location in Kharkiv oblast.
(Alex Chan Tsz Yuk/SOPA Images/LightRocket via Getty Images)

Fox News spoke to one of the coordinators of a similar group in Belarus that includes railway workers, ex-security services personnel and cyber warriors who claim to have “seriously hindered” the rail network and its infrastructure in many instances during the early stages of the war.

These Belarusians were already dissident, having soured on their country’s leadership after August 2020’s disputed elections when protestors were brutally put down.

Now they are doubly motivated to take action out of disgust about the war in Ukraine.

They currently have less work to do as most Russian troops have left Belarus for now. Both Belarus’ KGB and Russian military intelligence are onto them. It’s a cat-and-mouse game as they try to stay operational while they worry that more Russian troops could pour into Belarus if there’s another round of deployments.

In an interesting twist, perhaps the most interesting sign of dissent could have been what came from the mouth of that controversial Belarusian leader, Putin’s last real ally. Alexander Lukashenko said he did not think the war — or “operation” as he would call it — “would drag on this long.”

That got tongues wagging. Was it a slip of tongue or a signal to his Russian counterpart that there could be trouble brewing right next door on friendly soil?