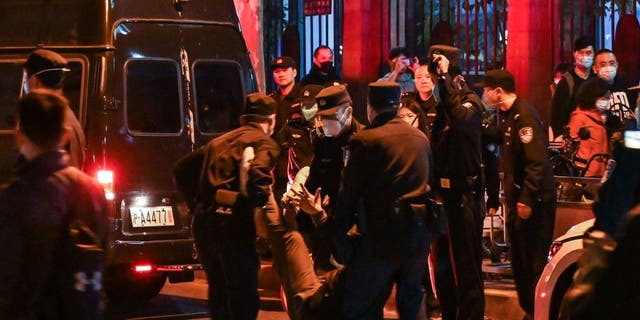 BEIJING – After a tumultuous weekend of nationwide protests things seemed to have slightly calmed down on Monday, but many here expect the protests to continue. On Sunday they had spread to some 20 provinces throughout China. The demonstrations over the country’s “zero-COVID” policy and a deadly fire in a high-rise building in Urumqi, the capital of Xinjiang province, that cost 10 people their lives seemed to have been the catalyst for many people in the communist nation to say enough is enough. The building had been in partial lockdown for nearly two months.

Over the weekend, things turned violent in several cities with protesters clashing with police. Videos posted online showed police attacking and carrying away some protesters. People have increasingly voiced their anger online.

On Saturday and into Sunday, people gathered in the city center of Shanghai to light candles for the victims of the deadly fire. Around midnight, the crowd had swelled to over a thousand people, chanting, “apologize,” directed at the central government, “Xi Jinping, step down,” and “Communist Party, step down.”

Such slogans aimed directly at Xi and his central leadership committee are unprecedented. Even during the Tiananmen Square protests in 1989, protesters demanded democratic reform, not regime change.

After an hours-long standoff between the police and the protesters, police forces started clearing the streets around 2 am in Shanghai. Although it began peacefully, an eyewitness told Fox News Digital that after a while, the police started pulling people out of the crowd, dragging them into police vehicles and took them away. On Sunday, requests for volunteer lawyers appeared on social media to help those arrested the night before.

In Beijing, where the government is battling one of the heaviest outbreaks since the beginning of the pandemic, people have demanded the easing of pandemic control measures.

A man is arrested while people gathering on a street in Shanghai on November 27, 2022, where protests against China’s “zero-COVID” policy took place the night before following a deadly fire in Urumqi, the capital of the Xinjiang region.
(Photo by HECTOR RETAMAL/AFP via Getty Images)

Shortly after the fire, students throughout the country organized wakes for all the victims of the deadly fire and all others who have been victim to China’s “zero-COVID” policy. In most universities, students who also have not been able to leave campus for months started putting up posters and spraying graffiti writing “rest in peace, people from Urumqi” and “we demand freedom.”

CHINESE AUTHORITIES LOOSEN COVID-19 RESTRICTIONS IN SOME NEIGHBORHOODS AFTER PROTESTS

On Sunday, videos and pictures of protests from at least 25 universities surfaced online. University protests are particularly sensitive for communist China given the country’s history with student-led demonstrations in the past. On Sunday morning, students from Beijing’s Tsinghua University, one of China’s most prestigious universities, staged a protest which was quickly ended by the police.

Residents record the scene as they mourn for the victims a recent deadly fire at a residential building in Urumqi city at a road sign of the Middle Wulumuqi Road or Middle Urumqi Road and call for freedom of the press in Shanghai Saturday, Nov. 26, 2022. Protests against China’s restrictive COVID-19 measures appeared to roil in a number of cities Saturday night, in displays of public defiance fanned by anger over a deadly fire in the western Xinjiang region.
(Chinatopix Via AP)

Craig Singleton, a senior fellow at the Foundation for Defense of Democracies and an expert on China, told Fox News Digital that, “The tenuous trust that exists between the Chinese Communist Party and the Chinese people is starting to fray, and it is not entirely clear that Xi has any new ideas to turn the tide. That said, these latest demonstrations appear unlikely to seriously challenge the party’s grip on power so long as they remain isolated and sporadic. More likely is that Xi will seek to appear responsive to the public’s growing discontent while politically distancing himself from recent lockdown orders, in essence shifting the blame to local and provincial-level officials.”

Although photos and videos of the protests in Xinjiang were soon censored, people have come up with ways of avoiding censorship. Popular online songs include video clips of “Do You Hear the People Sing” from “Les Misérables.” The song was deleted from Chinese streaming services years ago when protesters in Hong Kong adopted it as one of their protest anthems.

Chinese police officers block off access to a site where protesters had gathered in Shanghai on Sunday, Nov. 27, 2022. Protests against China’s strict “zero-COVID” policies resurfaced in Shanghai and Beijing on Sunday afternoon, continuing a round of demonstrations that have spread across the country since a deadly apartment fire in the northwestern city of Urumqi led to questions over such rigid antivirus measures.
(AP Photo)

Subtitled clips of live performances of the song “Get Up Stand Up” by Bob Marley & The Wailers and “People have the Power” by Patti Smith have been shared widely. In another an attempt to get around social media, people have posted pictures of artwork referencing the fire the killed the 10 people in Urumqui.

Another way people have voiced their criticism without running the risk of being censored has been to post clips of former leader Deng Xiaoping or even Xi out of context. One popular video showed the late Deng Xiaoping advocating a clip that had him say that people should put the economy before ideology.

Another video showed Xi warning the world not to provoke the Chinese people because, in his words, “they are organized” and “not easy to handle when provoked.”