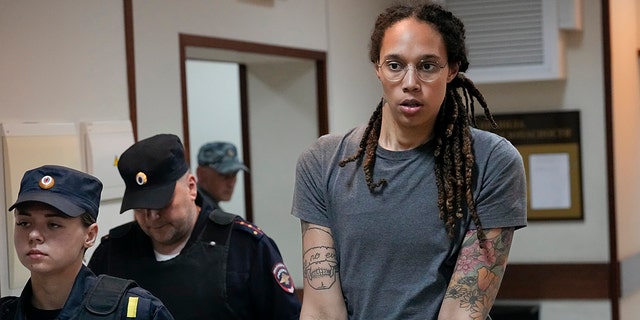 A former adviser to Russian President Vladimir Putin said Thursday that Moscow got the better of the prisoner swap that sent WNBA star Brittney Griner back to the United States for convicted arms dealer Viktor Bout.

Markov called Griner an “excellent athlete” and a “simple girl” but that Bout was more important to Russia. He added that prisoner swaps between Russia and the U.S. should favor Moscow.

“But the principle of exchange with Westerners should be like that,” he wrote. “Always in our favor.”

WNBA star and two-time Olympic gold medalist Brittney Griner is escorted from a courtroom after a hearing in Khimki, just outside Moscow, Russia, Aug. 4, 2022. On Thursday, she was freed in exchange for Viktor Bout, a convicted international arms dealer.
(AP Photo/Alexander Zemlianichenko, File)

Griner, 32, had been in Russian custody for nearly 10 months before being freed. She was detained at Sheremetyevo Airport in Moscow on Feb. 17 after Russian authorities said she had vape cartridges with cannabis oil inside her luggage.

On Aug. 4, Griner was given a nine-year sentence after pleading guilty, arguing that she had been prescribed cannabis for her pain and inadvertently packed it. Her sentence was upheld in October, and she was later transferred to a penal colony.

Bout is known as the “Merchant of Death” because of his notoriety for running a fleet of aging Soviet-era cargo planes to conflict-ridden hotspots in Africa. His dealings inspired the Nicolas Cage film “Lord of War.”

Russian arms dealer Viktor Bout is escorted by policemen as he arrives for a hearing at the Criminal Court in Bangkok in 2010.
(CHRISTOPHE ARCHAMBAULT/AFP via Getty Images)

He had been in U.S. custody since 2008 and was convicted in 2011 for conspiring to sell weapons for use to kill Americans. He was serving a 25-year federal prison sentence upon his release.

“Brittney will soon be back in the arms of her loved ones and she should have been there all along,” President Biden said Thursday. “This is a day we’ve worked toward for a long time. We never stopped pushing for her release.”

Paul Whelan, a former U.S. marine accused of espionage and arrested in Russia in December 2018, stands inside a defendants’ cage as he waits to hear his verdict in Moscow on June 15, 2020.
(Photo by KIRILL KUDRYAVTSEV/AFP via Getty Images)

The swap has received much criticism as former Marine Paul Whelan is still being held in Russia despite the State Department maintaining that he is being unlawfully detained on spy charges.

Before she was convicted and incarcerated in Russia, Griner called for the National Anthem to be protested at WNBA games.

Kent Christmas PROPHETIC WORD🚨[MANY FUNERALS 2023] MEN WILL SAY HOW COULD...