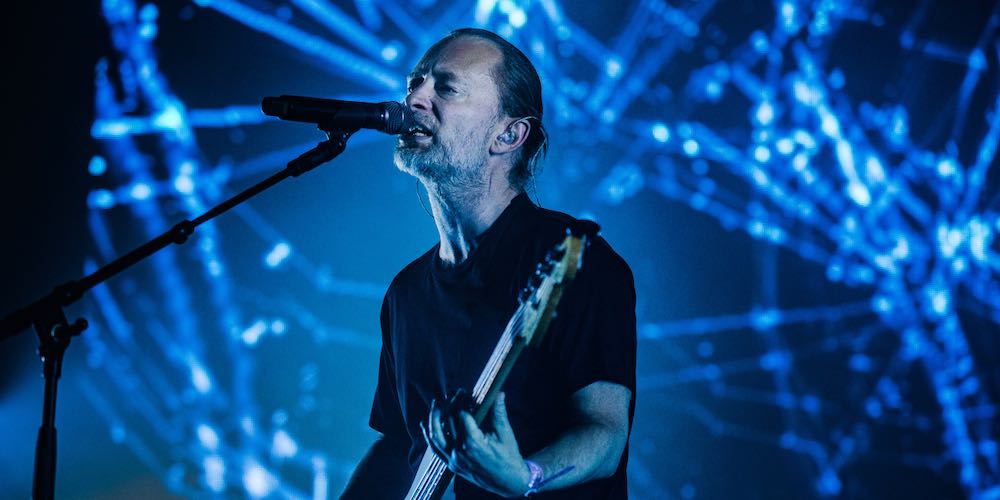 The British musical group Radiohead is one of the most brilliant and relevant bands of the last three decades. Formed in Abingdon, Oxfordshire, in 1985, the group, consisting of Thom Yorke, brothers Jonny and Colin Greenwood, Ed O’Brien, and Philip Selway, are not just remarkable songwriters, but also important cultural observers. When singer and frontman Yorke was on the Steven Colbert Show in 2019, Colbert asked him this: “For decades, you’ve been writing music that is uneasy and anxious with regards to society, our government, technology, the general direction of the world. How does it feel to be right?”

“I guess I wasn’t thinking about the future,” Yorke replied. “I guess I was looking at what was happening at the time. It’s more overt now.” He continued, “When we wrote the album Hail to the Thief, that seemed pretty bad—that period of time when Bush Jr. got in. And now we’re here.”

These comments seem unremarkable, reflecting the philosophy of an art-rock musician who—no surprise—leans left. Yet what Colbert and even most Radiohead fans might be missing is that there are themes in Radiohead’s music that are inspired not by Brexit or American elections or Twitter or cultural decay, but by Dante and The Divine Comedy. When Yorke said he “wasn’t thinking about the future” when he wrote some of his songs, he was telling the truth. He may have been thinking of a 13th-century Italian poet.

The dystopia that Radiohead identified and continues to examine, a place of darkness and digital slavery where the truth is denied, is reflected in our irrational politics, from Q-Anon election fraud conspiracies and lies about weapons of mass destruction, to the gruesome current fad of children getting mutilated in the name of transgenderism. Yorke and his bandmates may disagree with me on that last point; still, the Dante references in the band’s music and online presence seem to warn not only of the future Yorke mentioned to Colbert, but also of the one we now have taking place in Western society.

The clearest connection between Radiohead and Dante was Rachel Owen. Owen, who died from cancer in 2016, was an artist and medieval scholar who wrote her doctoral dissertation on Dante. Owen was also Thom Yorke’s partner for twenty-three years. The two met as art students at Exeter University and had two children together before separating in 2015. In his book Radiohead: Life in a Glasshouse, British journalist John Aizlewood notes that the composition of “In Limbo” off the band’s 2000 masterpiece Kid A was partly inspired by “the Dante’s Inferno audiotape Rachel Owen played in the car as she studied for her PhD at… University of London.” When Kid A was launched, fans went to the Radiohead website to find this quotation:

now must thou cast off all sloth…. for sitting on down or under blankets none comes to fame, and without it he that consumes his life leaves no trace of himself on earth, as smoke in air or foam on the water.
rise, therefore,
conquer thy distress with the soul, which conquers in every battle
if it does not sink with its body’s weight. there is a longer stair which must be climbed.

This is a quote from the Inferno (XXIV, 46-55). While the press and people like Colbert have emphasized Radiohead’s activism around issues like climate change and the band’s explorations of living in the postmodern age of technology, celebrity, and mass culture, the band itself has offered a wider vision of their art. In 2003 they released Hail to the Thief, an album whose title seems an indictment of the recent election of George W. Bush. Of course, Thom Yorke was not a fan of President Bush, but in an interview he argued that the album had a deeper reach:

If the motivation for naming our album had been based solely on the U.S. election, I’d find that to be pretty shallow. To me, it’s about forces that aren’t necessarily human, forces that are creating this climate of fear. While making this record, I became obsessed with how certain people are able to inflict incredible pain on others while believing they’re doing the right thing. They’re taking people’s souls from them before they’re even dead. My girlfriend—she’s a Dante expert—told me that was Dante’s theory about traitors and authority. I was just overcome with all this fear and darkness. And that fear is the ‘thief.’

The above quote has striking relevance when considered in light of the recent grisly turn the sexual revolution has taken. One can be liberal or even a conservative accepting of gay marriage and minding one’s own business and still see something demonic in the surgical mutilation of teenagers undergoing questionable sex reassignment surgery –—as well as the “drag shows” that are put on for children. Reread Yorke’s words: “I became obsessed with how certain people are able to inflict incredible pain on others while believing they’re doing the right thing. They’re taking people’s souls from them before they’re even dead.”

Another Dante reference in Radiohead comes in “2+2=5 (The Lukewarm),” the first song from Hail to the Thief. The false math equation, is, of course, from George Orwell’s 1984, but the parenthetical “The Lukewarm” comes from Inferno. Here are some of the lyrics:

This is a description of “the lukewarm,” or those “neutral angels” who would not take a position on issues—who were “lukewarm” rather than hot or cold, and as a result were neither allowed in heaven nor in hell, but languished in the “Antiferno.” As the Italian scholar Giulio Carlo Pantalei explores in his paper “The Middle Ages of Postmodernism: Dante, Thom Yorke and Radiohead”:

This will be the pain, Yorke seems to warn, for those who will not take a position on this loss of humanity, restricting themselves to sit and watch bombings and deaths on TV; on the other side, the English artist ideally puts aside an equally severe punishment for the modern lords of war…that is to be stuck in the frozen river of Cocytus within the Tolomea.

Yorke himself gave an explanation about the concept of the lukewarm whose lack of commitment leaves them trapped in the antechamber of hell:

They, the indecisive, have done nothing wrong, they simply didn’t do anything at all. So, Dante judges them and put them outside Heaven and Hell, and this—I guess—is one of the best ways to explain the concept of 2+2=5.

There is also the Orwell component from 1984. It’s the moment when Winston Smith finally capitulates to Big Brother:

He could not fight against the Party any longer […]. It was merely a question of learning to think as they thought. Only! The pencil felt thick and awkward in his fingers. He began to write down the thoughts that came into his head. He wrote first in large clumsy capitals: FREEDOM IS SLAVERY. Then almost without a pause he wrote beneath it: TWO AND TWO MAKE FIVE.

Much more so now than in 1985, the year Radiohead formed, there is a tyrannical effort on the left to force their “facts” on the population. From the questionable history of the 1619 Project to the economics of massive spending to curb inflation to the insistence that any man who declares himself a woman is in fact woman, the newest iteration of progressivism demands that 2 + 2 = 5. It is so extreme that even mainstream liberals like Andrew Sullivan and J.K. Rowling are shocked by the insanity of it. This is not to say that the insistence on falsehood doesn’t also appear on the far right, which is still denying the election results from 2020.

Yet even Radiohead hints that there might be a final resolution—a supernatural escape from the cacophony of technology, propaganda, disease, and fake news. In “Pyramid Song,” York describes leaving hell and sailing into eternal life, just as Dante sailed from hell into purgatory. Inspired by not only Dante but Tibetan Book of the Dead, Herman Hesse’s Siddhartha, and A Brief History of Time by Stephen Hawking, “Pyramid Song” is, like Radiohead’s best work, both dreamy and otherworldly in its sound and clear-eyed in its examination of the struggles of human existence.

I jumped in the river and what did I see?
Black-eyed angels swam with me
A moon full of stars and astral cars
All the things I used to see
All my lovers were there with me
All my past and futures
And we all went to heaven in a little row boat
There was nothing to fear and nothing to doubt

Sask academic says Trudeau’s fertilizer target is ‘political,’ not based on ‘factual information’

Automatic Bot - January 29, 2023 0
Ruja Ignatova referred to herself as the Crypto Queen and she’s now back in the spotlight, at least sort of, when news about the...
Go to mobile version