Monsignor Javier Herrera-Corona, the Vatican’s unofficial representative in Hong Kong, delivered a stark message to the city’s 50-odd Catholic missions before finishing his six-year posting in March: the freedoms they had enjoyed for decades were over.

In four meetings held over several months, starting in October last year, the 54-year-old Mexican prelate told Catholic missionaries in Hong Kong to prepare for a tougher future as China tightens its control over the city and he urged his colleagues to protect their missions’ property, files and funds, according to four people familiar with the private sessions, who asked not to be identified because of the sensitive nature of the discussions.

“Change is coming, and you’d better be prepared,” Herrera-Corona warned the missionaries, according to one of the people, who said he was summarizing the monsignor’s message: “Hong Kong is not the great Catholic beachhead it was.” 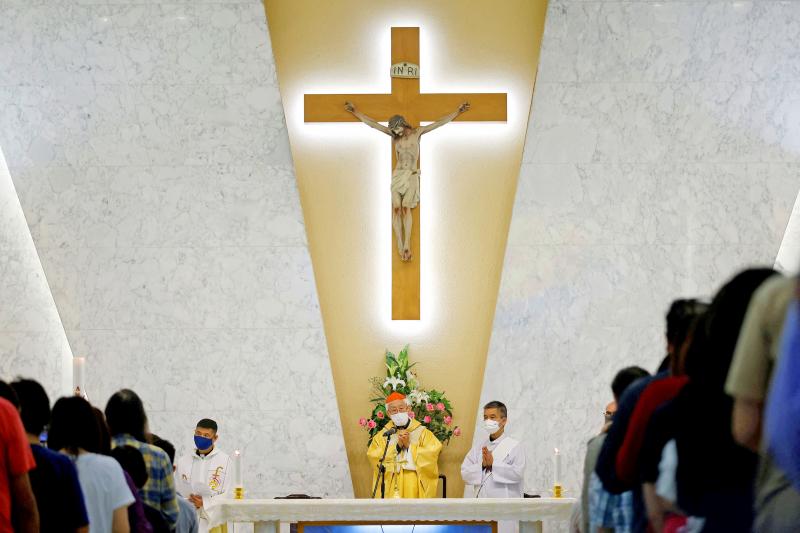 Herrera-Corona’s message came amid a national security crackdown by Beijing on Hong Kong in the wake of anti-government protests in 2019, including the erosion of civil liberties, the arrest of dozens of pro-democracy activists, and perceived threats to the independence of the city’s judiciary.

But his concerns went beyond the ongoing national security clampdown, the people said: Herrera-Corona warned that closer integration with China in coming years could lead to mainland-style restrictions on religious groups.

On the mainland, Catholics have long been split between an underground church loyal to the Vatican and a state-backed official church. The Vatican has no official representation in China after diplomatic ties were cut in 1951 beyond the presence of two unofficial envoys in Hong Kong, who operate from a walled villa in a Kowloon suburb. Herrera-Corona’s replacement as head of that unofficial mission is due to arrive in the next month.

Even before China imposed a sweeping national security law on Hong Kong in 2020 that outlawed “collusion with foreign forces” in the wake of the pro-democracy protests the previous year, Herrera-Corona and other envoys at the unofficial mission in the city had started discreetly moving cases of archives overseas for safekeeping, according to two people familiar with the transfer.

The monsignor’s warnings in the four meetings and details of the archival transfer have not been previously reported.

Herrera-Corona, who was promoted to archbishop after leaving Hong Kong in March to take up a new post in the Republic of Congo and Gabon, did not respond to e-mailed questions about the meetings or the efforts to protect the sensitive documents. A Vatican official did not comment.

The Central Government Liaison Office in Hong Kong and the State Administration of Religious Affairs under the State Council in Beijing did not respond to requests for comment.

Reuters reported in December that officials from Beijing’s Liaison Office in the city had organized an event at which Chinese bishops briefed senior Hong Kong clerics on President Xi Jinping’s (習近平) vision of religion with “Chinese characteristics.”

On a visit to Hong Kong to mark the 25th anniversary of its handover to Chinese rule, Xi on Friday defended the city’s “one country, two systems” style of governance that grants it wide-ranging autonomy not seen in mainland China, including religious and press freedoms. The system “must be maintained over the long term,” he said.

For decades, foreign missionary groups have operated largely unfettered in the former British colony, forging a Catholic enclave on the edge of mainland China, which is under atheist Communist Party rule.

Often funded and directed from other countries, the missionary societies in Hong Kong cooperate closely with the local Catholic church and take guidance from the Vatican. They concentrate on activities such as poverty relief and education.

Some also maintain close ties with Catholics on the mainland, where religious activity is controlled and the work of foreign missions remains strictly limited by regulation — reflecting staunch government resistance to outside interference in Chinese affairs.

The monsignor told participants in the meetings that the rights of religious institutions outlined in Hong Kong’s Basic Law — the mini-constitution that has guided the city’s relationship with its Chinese sovereign following the handover from British rule in 1997 — could not be relied upon as pressure from Beijing mounted, said the four people familiar with the situation.

Herrera-Corona said he did not have knowledge of any specific policy changes, the people added.

In 2019, when the Vatican envoys began transferring the archives, they feared their mission was under close scrutiny by China’s state security apparatus, said three Catholic clerics familiar with the situation. An investigation in late 2020 revealed that two nuns who worked at the mission had been detained on the mainland amid efforts by Beijing to tighten its control of the church in Hong Kong. The precise reason for their detention remains unclear.

By the time they finished, more than half a tonne of files on the Catholic church’s activities in mainland China and Hong Kong had been shipped to Rome, in part via a friendly diplomatic connection, the three people said.

The files dated back to the mid-1980s and mostly dealt with mainland China, including private communications with underground mainland clerics, missionary activity and details of persecution of Catholic faithful, according to two priests familiar with them.

Following the monsignor’s warnings, at least three missions have started moving files overseas, including some through protected diplomatic shipments, two missionaries and a diplomat said. They declined to identify the missions for security reasons.

Responding to questions, a Hong Kong government spokesman said the fundamental rights and freedoms of the city’s residents were guaranteed under the Basic Law and the national security law also stipulated that human rights shall be protected and respected.

Hong Kong is home to approximately 50 foreign Catholic missionary societies and religious orders, according to the diocese’s official directory, hosting more than 600 priests, brothers and nuns who serve as parish clerics and in schools and hospitals.

Representatives from most of Hong Kong’s missionary groups were briefed by the monsignor during the meetings. Three Western diplomats said they were also aware of his concerns.

During his meetings, the monsignor expressed fear things could deteriorate in part because Chinese authorities had identified several prominent Catholics as leading figures in the pro-democracy demonstrations in 2019 and critics of the national security law, said the four people familiar with the meetings.

The arrest in May of prominent former Hong Kong bishop, 90-year-old Cardinal Joseph Zen (陳日君), heightened the sense of urgency to take steps to protect the church in Hong Kong, six missionaries and a diplomat said. Zen was detained as part of a police probe into foreign collusion over a legal support fund for those arrested in the protests.

An assistant to the cardinal, who has been released on bail pending charges, said he would not comment.

A publication last year — edited by researchers Chen Jingguo of the Chinese Academy of Social Sciences, a leading government think-tank, and Zhang Bin of Jinan University — singled out Hong Kong’s Catholics for criticism over the 2019 anti-government protests.

The publication examined the recent development of religions in Hong Kong and southern mainland China — a region, known as the Greater Bay Area, that both Hong Kong and Chinese officials are keen to integrate.

Hong Kong’s political environment had “continuously deteriorated” since the handover, in part due to religious groups and major figures of influence such as Cardinal Zen, the document said. Catholics were more involved in the city’s politics than other Christians and its “affiliate teachers and students are more radical,” the document says.

Like other of the academy’s so-called “Blue Books,” it has been circulated to mainland academics, central government bodies and some state media, according to Hong Kong scholars familiar with it. The state-backed Hong Kong newspaper Ta Kung Pao featured the work on its release in August, describing it as the first comprehensive study of religions in the Greater Bay Area.

Neither Chen, Zhang, the academy, nor Jinan University immediately responded to requests for comment. Responding to questions about missionary concerns over the document, a Hong Kong diocese spokesperson said it had “constant communications with local missionary societies. We exchange views with each other on different issues from time to time.”

The national security law allows authorities to target anything they deem to be subversive foreign interference and gives them expanded powers of surveillance as well as the ability to freeze the assets of any person of interest before formal charges are laid.

Both Chinese and Hong Kong government officials have said the law was needed to ensure stability in the city and that prosecutions were based on evidence, unrelated to people’s background or occupation.

Some Catholic missions own large properties in some of Hong Kong’s wealthiest districts, including villas, retreat houses and a hospital, that would be valued at billions of Hong Kong dollars, according to estimates based on recent market activity for similar assets.

Following the monsignor’s guidance, some missions are considering steps ranging from placing their property holdings under local ownership to localizing their boards and corporate registrations in order to protect them from any crackdown, including tighter restrictions on foreigners, say five people familiar with the situation.

Such moves would create an extra layer of distance between foreign mission headquarters and local operations given the national security law’s focus on collusion with overseas authorities and its power to seize assets, they said.

The monsignor also told the missions to be prepared for possible curbs on long-standing programs, such as foreign missionaries serving as parish priests in local churches, said the four people familiar with the meetings.

Father Pierre Lam Minh, a missionary who heads a local Vatican-established council that oversees men’s missions, said in a statement that Herrera-Corona’s message was the prelate’s “own advice.”

“We are carrying out our missionary work as usual,” he said, adding that the missions did not see any restrictions on religious freedom.

Women’s council head Sr Joanna Marie Cheung said her association had discussed questions with the men’s group and “we share the same opinion.”

The spokesman for the Hong Kong diocese said that, as no diocesan members were present, he could not comment on the meetings. He added that religious freedom was guaranteed to Hong Kong residents by the Basic Law and the 2020 national security law had not affected the pastoral missions of foreign missions in Hong Kong to date.

Comments will be moderated. Keep comments relevant to the article. Remarks containing abusive and obscene language, personal attacks of any kind or promotion will be removed and the user banned. Final decision will be at the discretion of the Taipei Times.