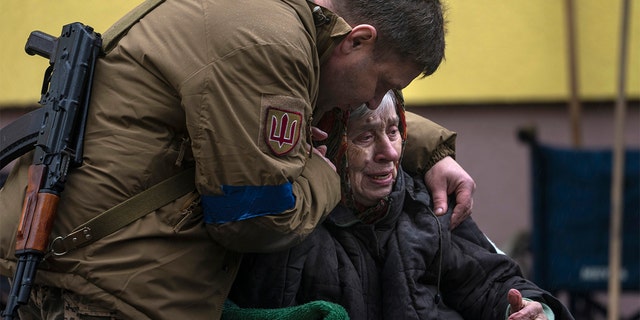 He seemed a little too much even for the hosts of Russia’s militant “60 Minutes” program.

“One Sarmat and the British Isles are gone,” bellowed Duma member Alexei Zhuravlev, referring to one of Russia’s newest intercontinental ballistic missiles.

The husband-and-wife team of Olga Skabeyeva, sometimes referred to as Russian President Vladimir Putin’s “Iron Doll,” and Yevgeny Popov,  also a Duma deputy, made what appeared to be attempts to rein their guest in. But, in the end, they let him rip. Soon, graphics took over the TV screen showing Russian nukes’ travel time to Europe and Britain. It lasted a matter of seconds.

A soldier comforting Larysa Kolesnyk, 82, after being evacuated from Irpin on the outskirts of Kyiv, Ukraine, March 30.
(AP Photo/Rodrigo Abd, File)

I asked Yevgeny Popov if he was, in fact, rattled by the nuclear saber-rattling on the air that night. The answer was yes.

“Because there will be no winner in this kind of war,” he said. “We will have an empty planet with no humans living.”

But Popov went on to accuse the West of threatening Russia with its comments about wanting to see the country weakened, though the U.S.’s posture has been in the context of getting Putin to stop the war on Ukraine.

Popov said Russia would never use a nuclear weapon first. But, the Kremlin earlier vowed it would never attack Ukraine too.

The narrative that the West has been wanting to put Russia down all these years is stuck in the craw of Russia’s propagandists. I suggested to Popov that this narrative was false.

“Hmmmmm,” he said. “I can’t agree with you. I think you are completely wrong, because now we have war between Russia and the West.”

He cited Republican Sen. Mitt Romney’s comment when running for president about Russia being the United States’ biggest geopolitical foe. I pointed out that Romney did not become president. And Presidents Obama and Trump looked for ways to reset relations with Russia. The arguments with propagandists like Popov typically go round and round. Romney may have been right.

Popov repeated the oft-used Kremlin line about the U.S., having gone to war in Iraq, should not weigh in on the war in Ukraine. I asked how he felt about the flattening of entire Ukrainian cities and the millions of refugees who have escaped.

“Of course I feel sad, like every human on this planet,” he said. But, he still said Russia was in the right, that Ukraine was full of Nazis using civilians as human shields, the Kremlin’s arguments for which it has provided no evidence and which the West has called patently false.

Entire apartment blocks in Ukraine have been bombed, and Russian soldiers have shot fleeing civilians from behind. Furthermore, there was no evidence that Ukraine was ever going to attack or threaten Russia.

Popov said his father was in Ukraine. He wouldn’t say where specifically. I asked how he thought that, after all this, Ukraine could ever be friendly toward Russia, something Russia claimed it wanted.