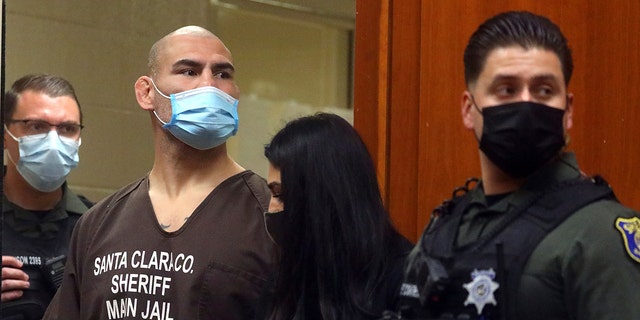 Ronda Rousey, the WWE superstar and former UFC champion, has come to the defense of Cain Velasquez, who is facing attempted murder and other charges related to a shooting this week.

San Jose Police said Velasquez was attempting to shoot a man who allegedly molested one of Velasquez’s relatives. The retired MMA star was arrested on multiple charges.

Rousey tweeted Thursday she would have done the same thing if she were in Velasquez’s shoes.

“I would have done the same thing if not worse,” she tweeted.

According to police, San Jose and Morgan Hill officers received a call about a man shooting into a vehicle with three passengers inside. The gunman was identified as Velasquez, and he allegedly shot one man, who was later transported to a hospital with injuries. The report said Velasquez followed a woman and another man, who was later identified as Harry Goularte Jr.

Police said Velasquez fired a gun at Goularte, who was recently charged with molesting a close relative of the retired mixed martial artist. Goularte was charged with one felony count of a lewd and lascivious act on a child Feb. 25 and was granted supervised release, police said.

Goularte lived at a day care run by his mother. Goularte’s mother was inside the vehicle Velasquez shot at, according to police. Authorities said the day care had been temporarily shuttered.

After Velasquez’s arrest, Morgan Hill Police recovered a .40-caliber semi-automatic handgun in the suspect’s vehicle with nine bullets in a 10-round magazine, a police report said. There was another magazine in the console that had three bullets, and two .40-caliber casings were found in the passenger seat. Police said the gun was legally registered to Velasquez.

Police said four shell casings were found at the site of the shooting, and a shell casing was lodged in the vehicle in which the victims had been sitting.

Velasquez’s attempted murder charge stems from him shooting at Goularte, according to The Mercury News. He is also facing a charge of shooting at an occupied vehicle, multiple assault counts and a weapons charge.

“The sad tragedy is that Mr. Velasquez chose to take the law into his own hands, endangering the public and everyone in the truck,” Santa Clara County District Attorney Jeff Rosen said, via KTVU. “This act of violence also causes more pain and suffering to his family.”

Velasquez was a champion fighter in UFC, winning the UFC heavyweight championship over Brock Lesnar at UFC 121 in October 2010. After losing it in his next fight against Junior dos Santos, he recaptured the title over dos Santos at UFC 155. Velasquez defended his title twice before losing it to Fabricio Werdum.

Since retiring from mixed martial arts, Velasquez had been seen in pro wrestling, performing for WWE and the Mexican wrestling promotion AAA.