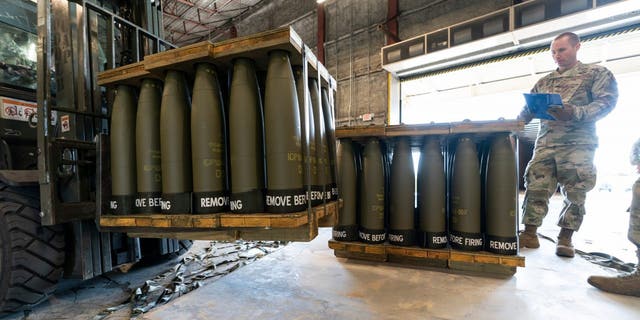 Russian Foreign Minister Sergei Lavrov accused the U.S. and NATO on Thursday of “direct” participation in its war in Ukraine but claimed Moscow was still open to talks.

In an annual news conference from Moscow, the foreign minister began his comments by defending Russia’s barrage of missile fire on civilian targets like Ukraine’s energy sector and attempted to claim it was a defense tactic to halt Western arms.

“We disable energy facilities [in Ukraine] that allow you [the West] to pump lethal weapons into Ukraine to kill Russians,” Lavrov said, according to a translation by Reuters.

“So don’t say that the U.S. and NATO are not participants in this war – you are directly participating,” he continued.  “Including not only with the supply of weapons, but also with the training of personnel – you train the [Ukrainian] military on your territory.”

Lavrov was referring to international efforts to train up Ukrainian servicemen with NATO tactics in nations like Britain, Germany and Italy – comments which were made after reports surfaced this week suggesting that Washington may expand its training of Ukrainian soldiers on U.S. bases in Germany.

Russia has been accused by NATO of using winter as a “weapon of war” by forcing Ukrainian citizens to endure increasingly harsh conditions without electricity, heat or running water as the cold months set in.

Ukrainian troops ride upon a repaired Russian tank in a wooded area outside the city on Sept. 26 2022, in Kharkiv, Ukraine.
(Paula Bronstein /Getty Images)

The West has further claimed that Moscow is targeting civilian populations as a way to try and force Kyiv to capitulate as Russian forces have seen significant losses on the front lines.

It remains unclear what the general sense in Russia is when it comes to Moscow’s deadly war in Ukraine, though cities across Russia have canceled their Christmas and New Year’s celebrations in recognition of the costly war.

Western estimates regarding the toll that the war has taken on Russian troops suggest that they have seen at least 80,000 casualties since the war began in February.

Ukrainian President Volodymyr Zelenskyy has said he will not engage in peace talks until Russia completely withdraws all troops from Ukraine.

Diminished relations between Russia and the West remains a major geopolitical concern, particularly after Moscow pulled out of scheduled talks with Washington this week on the nuclear New START Treaty.

Lavrov on Thursday suggested that Russia remains open to talks with the U.S. and NATO member nations, but said it was “naive” of the U.S. to think it would engage in nuclear talks at this time.

“For now we aren’t hearing any meaningful ideas,” he said. “If there will be proposals from the president [Biden] and from other members of his administration, we’ll never shy away from contacts.”