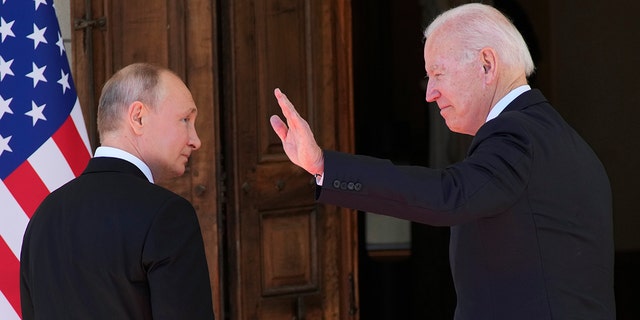 Russia has imposed “retaliatory sanctions” against President Biden, a number of his top administration officials, former Secretary of State Hillary Clinton and Biden’s son Hunter Biden amid its ongoing war with Ukraine.

According to Russian state-owned news agency Tass, the Russian Foreign Ministry on Tuesday imposed “personal sanctions against representatives of the U.S. leadership and persons associated with them.”

The sanctions, according to the report, were imposed “in response to a series of unprecedented sanctions prohibiting, among other things, entry into the United States for top officials of the Russian Federation.”

The report said that as of March 15, Biden and the other individuals listed would be included on a Russian “stop list” on the “basis of reciprocity departments and well-known American figures.”

The White House did not immediately respond to Fox News’ request for comment on the sanctions.

BIDEN ANNOUNCES BAN ON US IMPORTS OF RUSSIAN OIL, WARNS GAS PRICES WILL ‘GO UP FURTHER’

The sanctions come after the U.S. and Western allies have imposed severe and crippling sanctions on Russia, including on President Vladimir Putin.

Biden, last month, sanctioned major Russian banks, including VTB, Sberbank, Bank Otkritie, Sovcombank OJSC and Novikombank. The sanctions made it harder for Russia to do business in dollars, euros, pounds and yen.

BIDEN ADMIN HAS ‘DEEP CONCERNS’ ABOUT CHINA’S ‘ALIGNMENT’ WITH RUSSIA AMID WAR AGAINST UKRAINE, OFFICIAL SAYS

The U.S. and its partners have also said they would go after the Russian military and Belarusian individuals and entities for their support for the invasion.

SWIFT provides messaging services to banks in over 200 countries, and is controlled by the central banks of the G-10, including Belgium, Canada, France, Germany, Italy, Japan, the Netherlands, the United Kingdom, the United States, Switzerland and Sweden.

Last week, Biden moved to ban all imports of Russian oil, gas and energy to the United States, targeting the “main artery” of Russia’s economy.

Biden also called for an end to normal trade relations with Russia, and said last week that the United States is banning the import of Russian seafood, vodka and diamonds.

Revoking Russia’s “most favored nation” status will allow for increased tariffs on imports from the country in addition to the crushing sanctions already imposed as a consequence of Russia’s invasion of Ukraine. But it must be done by Congress. Biden highlighted bipartisan support for the move in a Friday announcement in conjunction with other G7 and European Union leader.

Russia’s economy is struggling under the weight of the sanctions and a deep recession is predicted in the country, according to the IMF.

According to U.S. intelligence, confirmed by Fox News, after its invasion of Ukraine on Feb. 24, Russia asked China for military and economic aid. In an attempt to protect intelligence sources, U.S. officials have been reluctant to detail what type of aid is being sought.

“We do have deep concerns about China’s alignment with Russia at this time,” a senior administration official said Monday, noting that U.S. officials have been “direct about those concerns and the potential implications and consequences of certain actions” with their Chinese counterparts.