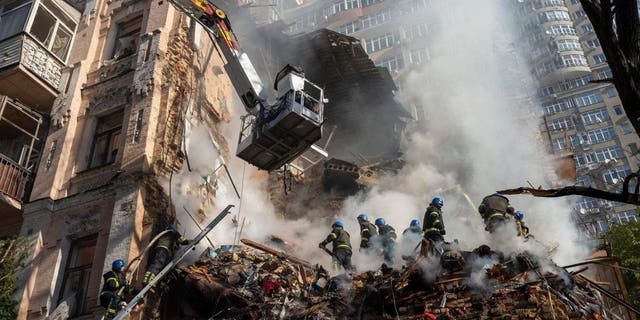 Moscow and Tehran have reached a deal to make drones on Russian soil to bolster its war effort in Ukraine following months of relentless bombings on civilian locations, a report by the Washington Post said Saturday.

Fox News could not immediately reach the Pentagon for comment, but according to the report, U.S. intelligence officials recently learned of the agreement which was reached by the two nations in early November.

The U.S. first revealed Iranian plans to “gift” Russia hundreds of Shahed-136 drones earlier this year and by August 1,000 Iranian-supplied drones were shipped off to Russia before being dropped over civilian targets in Ukraine.

The agreement apparently coincided with Russia’s defeat in Kherson earlier this month when it withdrew its forces from the capital city in its biggest military loss since retreating from Kharkiv in September.

It is unclear which drone design would be employed for production in Russia, but according to the report officials from both nations are working the transfer key components and plans to get the manufacturing up and running within three months.

A reported 400 drones have been dropped over various targets in Ukraine, hitting civilian neighborhoods, villages, cities and the nation’s energy infrastructure.

Russia has intensified its aerial attacks in recent months while its ground forces continue to see setbacks as Ukrainian forces push the front lines farther east.

A drone is launched during a military exercise in an undisclosed location in Iran, in this handout image obtained on Aug. 25, 2022.
(West Asia News Agency/Handout via REUTERS/File Photo)

Since Nov. 11, Russia had launched roughly 150 missiles and over 25 kamikaze drones against Ukraine, according to Ukrainian General Staff Deputy Chief Oleksii Hromov on Thursday.

Over 100 of the air strikes carried out in the six-day period were blocked by Ukraine’s air defenses.

But Russia’s latest agreement with Tehran may not only increase its ability to produce more drones but may rapidly increase the amount of time it would take to refit its troops both in Ukraine and those in border regions in Russia and Belarus.

Ukraine has pleaded with its Western allies since the beginning of the war to help it improve its air defenses – a request that has become ever more urgent given Russia’s heavy reliance on aerial attacks.

Secretary of Defense Lloyd Austin said this week that he, and the nearly 50 other allied nations that make up the Ukraine Contact Group, were looking to send Ukraine the “right mix” of air defenses and weaponry to stop Russia from gaining air superiority.

The news that Moscow will increase its drone production also comes just three days after a Ukrainian air defense system crashed across NATO borders and killed two in Poland after Russia levied missiles at Western Ukraine.