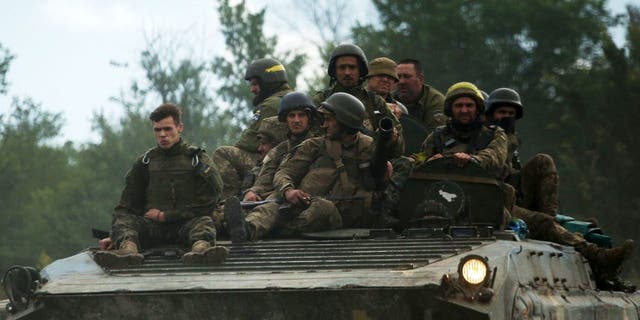 A bloody fight continues over the city of Lysychansk in the Luhansk region of Ukraine as Russian forces push forward with their attempts to gain control over the region, a top Russian sympathizer said Wednesday.

“There is active fighting near Lysychansk, where, according to the latest reports, a quite bloody combat is in progress with a lot of casualties,” Rodion Miroshnik, a representative for the separatist Luhansk People’s Republic aiding Moscow’s offensive, told a Russian media outlet. “About a third of the [Ukrainian] military have surrendered, with the other two-thirds left lying in the field.”

Ukrainian soldiers ride on an armored personnel carrier (APC) on a road of the eastern Luhansk region on June 23, 2022, amid Russia’s military invasion launched on Ukraine. On the road between the towns of Siversk and Bakhmut, AFP journalist witnessed several shellings on the route, which is now the main itinerary being used to reach the city of Lysychansk.
(Photo by ANATOLII STEPANOV/AFP via Getty Images)

Fox News could not verify the LPR ambassador’s claims, but the Ukrainian defense ministry on Wednesday said “the main efforts of the enemy are focused on conducting hostilities” in the area “in order to encircle the city of Lysychansk.”

A U.S. defense official said Tuesday that Russian forces had not yet been able to fully encircle the city.

Lysychansk has become the site of brutal fighting after Russian forces took the strategically important city of Sievierodonetsk, located directly across the Siverskyi Donets River, and have continued their westward campaign across Luhansk.

GRAPHIC CONTENT / The father of a man who was reportedly killed by a cluster rocket mourns over his body in the city of Lysychansk in the eastern Ukrainian region of Donbas on June 18, 2022, amid the Russian invasion of the country.
(ARIS MESSINIS/AFP via Getty Images)

The contested city is just 12 miles from the Donetsk border and stands as the final holdout of Ukrainian opposition in the region.

If Russian forces are able to take Lysychansk they will have essentially gained control over the Luhansk region, which will not only make it easier to push south and pinch the Donetsk region but advance their campaign west further into Ukraine.

Moscow has claimed its military ambitions are to gain complete control over eastern and southern Ukraine.

But Ukrainian officials have warned that Russia will not stop if it gains control over these regions and will make another attempt at taking Kyiv.

An Ukrainian serviceman looks on after a strike on a warehouse on the outskirts of Lysychansk in the eastern Ukrainian region of Donbas on June 17, 2022.
(Photo by ARIS MESSINIS/AFP via Getty Images)

Russia has begun to ramp up its aggression toward the capital city and fired missile strikes directed at Kyiv over the weekend from Belarus.

Officials have further warned that Russia is looking to bring Minsk into the war and is planning sabotage operations in Belarus in an attempt to instigate a response from Ukraine’s northern neighbor.

yvngxchris – In Christian We Trust (Official Video) Directed by @CRATERMOON