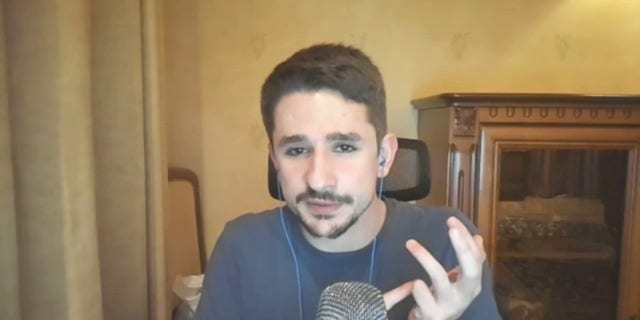 Popular Russian blogger Michael Nacke and military analyst Russlan Leviev are now officially wanted by the Russian state for discrediting the army — but neither of them are in Russia right now.

For Nacke, this war is the most horrible occurrence imaginable. He says he’s sleeping with it and waking up with it. He told Fox News that all he’s wanted to do is help in some way to make it stop, and that he’s long wondered if his work reporting on the war with Leviev daily is making any difference. “Now I have the answer, because if the Kremlin or Putin’s regime think that I’m a danger for them, that means that I am doing the right thing.”

Leviev’s experience stemmed from the Conflict Intelligence Team (CIT). He said he will keep doing videos, and more of them.

Nacke left Russia long before the war at a point when he felt the situation had become too ominous there.  Since Feb. 24, when Russia invaded Ukraine, he and Leviev have been a tag team: Nacke the interviewer., Leviev the expert, the wonk who has studied images of military hardware on TikTok and other forms of social media, scanned open-source reports, scrutinized satellite imagery.

A couple of times, they have gotten things wrong. Nacke said Leviev always has corrected such errors soon as he catches them to set the record straight. They have spoken, Nacke said, with soldiers who wanted out. “They write to me and say, Michael, we don’t want to take part in this war. Some of them, not all of them. Part of them are just, you know, monsters, really monsters, but some of them, they said that they were forced into this battle.”

Nacke has some 700,000 subscribers on his YouTube channel. When asked about the most interesting aspect of this war they’ve reported on, he claimed it was a story about transport vehicles being used to cart stolen goods out Ukraine, specifically washing machines.

“They left the dead bodies of their soldiers behind and used the vehicles to move washing machines,” he said. “It’s what you need to know about the Russian army–that nobody cares about anybody.”

The recruitment of young men from impoverished regions of Russian has been widely reported.

Few casualties seem to involve soldiers from the big cities like Moscow and St. Petersburg, because there are ample opportunities for work there. Still, the looting has been just another unsettling aspect of the conflict.

Nacke cited another story of an officer who was in charge of a tank battalion that was all but crushed in a battle. The leading officer, according to Nacke, was not even present at the battle. His father, a general in the Russian army, then rushed to award his son a medal. Nacke claimed he and Leviev put the story together from bits and pieces including some learned from state TV. “It’s corruption,” Nacke said.

He claimed it’s worse in the army than it’s been in other sectors of Russian life, and that is why the equipment has let the troops down. He described the supposedly sophisticated weaponry Russian President Vladimir Putin has shown off in recent years as “cartoons–with bad graphics because in graphics they have corruption too.”

Nacke said it’s easy to say all these fancy missiles exist, without backing it up. Nobody seems to really know just what Russia’s got in its arsenal.

Nacke said that he thought Ukraine will win, and that the Ukrainians have been good at defending their country. He described himself as being eager to see how they might attack once they get more weapons. Will they claw back Crimea?

He also said he didn’t think Putin was crazy. “He tries to get everyone to believe that he is mad because it is his weapon. If everyone thinks you will start a nuclear war, then they will be afraid of you.”

Nacke concluded that Putin liked his life, his riches, his family that’s included “many kids from different women.” Of course, Putin is famously secretive about his personal life, so all this talk about multiple children and lovers remains in the realm of speculation.

As if this “wanted notice” has fired Nacke up, he said, “I believe, and I hope after he loses this war, he (Putin) will lose his power.  I’m not in Russia right now and it’s not very good for me. I love Russia. I’m a patriot in a good way. I want to go back. I will come back on the first plane when this man dies or leaves his post or goes to prison, or something.”