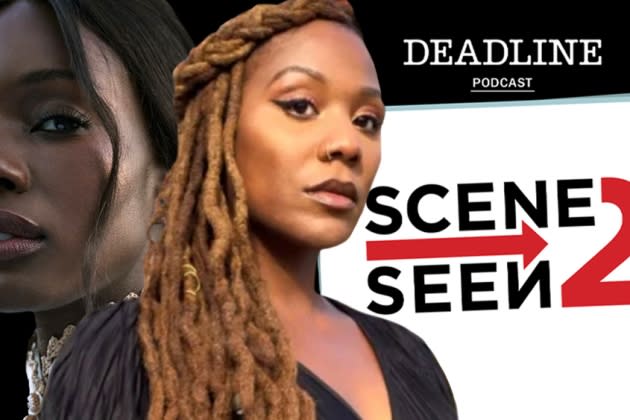 Hello and welcome back to the Scene 2 Seen Podcast!

I am your host Valerie Complex, associate editor and film writer at Deadline.com

Sorry again for the hiatus. I wish you could know how hard it is to do a podcast right in the thick of festival season. There are a lot of worries about publishing and a bunch of logistical stuff that’s complicated to navigate. Anyway, no hiatuses for a good while, so we can get on with the show!

On today’s episode, Nikyatu Jusu, and actress Anna Diop, talk about the supernatural horror film Nanny. We get into some heavy topics, including discussing the fallout of Covid and its impact on the film, criticisms Nanny has faced, and how race and gender factor into some of the challenges the director faced while making the movie. Diop also discusses her time on Titans and some of the struggles she’s faced on the series.

Directed and written by Jusu, Nanny follows Aisha (Diop), an immigrant from Senegal who is hired to care for the daughter of an affluent couple (Michelle Monaghan and Morgan Spector) living in New York City. Haunted by the absence of the young son she left behind, Aisha hopes her new job will afford her the chance to bring him to the U.S., but she becomes increasingly unsettled by the family’s volatile home life. As his arrival approaches, a violent presence begins to invade both her dreams and her reality, threatening the American dream she is painstakingly piecing together.

Jusu is an independent writer, director, and Assistant Professor in Film & Video. Her short film Suicide by Sunlight made its debut at the 2019 Sundance Film Festival, and Nanny is Jusu’s screenwriting and directing feature film debut. The script was selected for the 2019 Sundance Institute Creative Producing Lab, the 2019 IFP Project Forum, and the 2020 Sundance Screenwriter’s, and Director’s Labs. She is the second Black woman director and Nanny is the first horror film to win the Sundance Grand Jury Prize (US Dramatic) 2022. This is an enormous achievement that will hopefully shine a light on cinema directed by Black women. However, why did it take this long for that to happen? That’s a discussion for another day.

Anna Diop is a Senegalese-American actress who has an illustrious television and film career. Currently, Diop stars in the DC universe live-action Titans show as the titular ‘Starfire’. She also was a series regular on FOX’s reboot of 24: Legacy with Corey Hawkins. In addition she has starred in Own tv’s Greenleaf and prime video series Bosch. As for film, the actress has starred in Jordan Peele’s Us, and Message From The King opposite Chadwick Boseman.

Nanny is set to premiere theatrically on November 23rd and on Prime Video on December 13th.

If you like what you hear on today’s episode, please be sure to review, like, and subscribe to the Scene 2 Seen Podcast on Apple and Spotify!