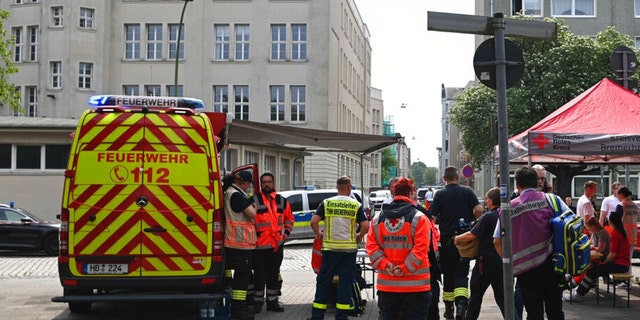 A Thursday attack at a northern German school left one person seriously injured.

A high school employee in Bremerhaven was wounded by an assailant with an unidentified weapon and a suspect was detained.

Police said that they were first notified of the incident at the Lloyd High School at 9:15 a.m. local time.

The suspect was a 21-year-old man and did not resist the authorities.

Emergency forces stand near a school in Bremerhaven, Germany, Thursday, May 19, 2022.
(Sina Schuldt/dpa via AP)

Prosecutor Oliver Constien said the wounded woman was taken to a hospital and that her life was still in danger.

He noted that a “particular psychological disposition may have contributed” to the assault, and investigators are working to determine whether the suspect knew the victim.

The police did not give any details about the person who was detained, though they initially said the suspect was not a student.

German news agency dpa reported that about 200 students were at the school. They stayed in a classroom while special forces searched the building and were evacuated around lunchtime after investigators determined there were no other perpetrators.

Roads were closed around the area.

Police and emergency forces stand near a school in Bremerhaven, Germany, Thursday, May 19, 2022.
(Sina Schuldt/dpa via AP)

On the school’s website, administrators wrote to notify parents that their children were safe and that there was a hotline they could contact.

The city also set up a psychological advice line for the students and their parents, with consultation available all day.

The city’s mayor, Melf Grantz, condemned the act and wished the victim a speedy recovery.

Reuters and The Associated Press contributed to this report.