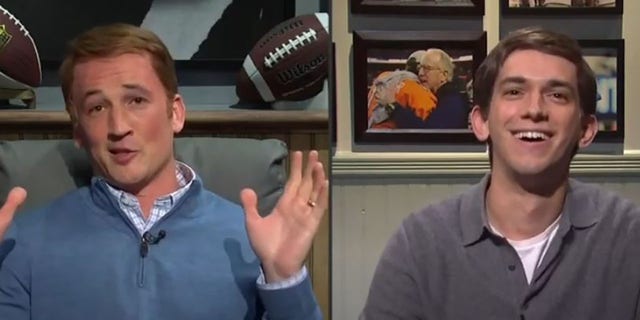 The fake Peyton described his “Monday Night Football” show with brother Eli Manning (cast member Andrew Dismukes) as their “Manningcast where we do live analysis of what’s already played on TV.”

Teller said they would watch the first cold open sketch of the season to see what the cast and writers spent the “entire summer coming up with.”

“Oh, good a Trump sketch. Way to mix it up,” Teller said sarcastically as cast members acted out a scene set at Mar-a-Lago.

HOW DID MILES TELLER BECOME FAMOUS? FROM ‘WHIPLASH’ TO ‘TOP GUN’ AND EVERYTHING IN BETWEEN

The co-hosts went on to critique the cast members’ performances in the sketch, highlighting the four new comedians in light of the stark changes in the lineup since last season.

“The new guy’s just panicking he’s just staring at the camera,” Dismukes as Eli said of Longfellow after saying that he had forgotten to shut the door following his bit part in the sketch. “That might be the only time we see him tonight.”

The show often pokes fun at itself about some new cast members being underused.

They also touched on impression wizard McKinnon’s departure when Teller suggested the sketch should have more “fun” impressions like Anthony Fauci, Rudy Giuliani and Lindsey Graham – all of which were McKinnon.

The two then looked at the sketch’s “stats,” noting that of 14 attempted jokes there was only “one mild laugh and two chuckles.”

“Thank God they’ve got [musical guest] Kendrick Lamar because that’s the only reason anyone is tuning in.”

Fellow “Top Gun” star Jon Hamm made a surprise appearance in the sketch, saying “I don’t know but it’s not comedy” when asked by Teller to give his opinion of what he was seeing in the sketch.

Miles Teller and Tom Cruise attend the photocall of “Top Gun: Maverick” during the 75th annual Cannes film festival at Palais des Festivals on May 18, 2022 in Cannes, France.
((Photo by Toni Anne Barson/FilmMagic))

“I mean, when they couldn’t get the star of the big summer movie: your Tom Cruise or your Jon Hamm, they had to get the co-star,” Hamm deadpanned to Teller of why he and White were tbrought in.

Teller answered indignantly, “Well, I heard they rarely put the hosts in cold open, so when they do, it is special.”

“Special? Or is it desperate?” Hamm replied.

Later, in his monologue, Teller remarked about how much he actually loves “Saturday Night Live.” This is pretty standards for hosts to say, but in Teller’s case he brought receipts.

He said his mom, who was in the audience, found an old VHS tape of his sister and him reenacting an old “SNL” Spartan cheerleader sketch from the mid-90s made famous by former cast members Will Ferrell and Cheri Oteri.

He said that alongside his sister he was cast as Cheri Oteri “because I had the frame for it” before showing the very real, very homemade tape.

He added, “How crazy is that? My parents used to watch me doing skits in my living room and now they’re here watching me host ‘Saturday Night Live!’”

Vengeance for the Saints of God Revelation 19:1-5