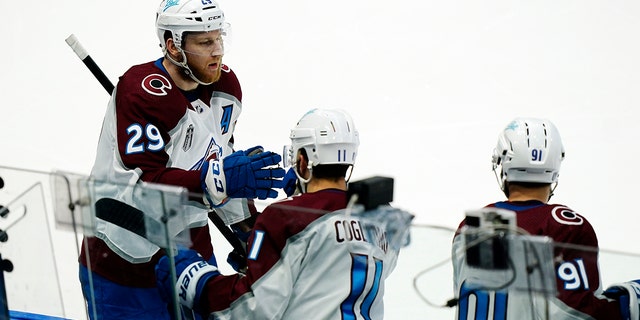 The Colorado Avalanche dethroned the Tampa Bay Lightning on Sunday, picking up their third Stanley Cup championship in franchise history with a 2-1 victory in Game 6 to capture the title.

Nathan MacKinnon and Artturi Lehkonen got the goals while the Avalanche delivered an incredible defensive effort in the third period to seal the victory.

MacKinnon got the game-tying goal past Lightning goaltender Andrei Vasilevskiy 1:54 into the second period and Artturi Lehkonen got the go-ahead goal at the 12:28 mark – and it was all the Avalanche needed.

Until Tampa Bay pulled Vasilevskiy, their offense was almost nonexistent. The team had only two shots on goal until they put the sixth man in the zone and even then, Colorado kept the pressure on the Lightning.

Darcy Kuemper stopped 22 shots and his counterpart, Vasilevskiy, had 28 saves.

It looked like Tampa Bay was going to send the game back to Denver until MacKinnon’s goal. The Lightning started strong with Steven Stamkos getting one past Kuemper. However, it was only goal Tampa Bay got and it was far from enough.

Colorado defenseman Cale Makar, who won the Norris Trophy, was named the Conn Smythe Trophy winner as the top player in the Stanley Cup playoffs. He finished with 29 points in the postseason.

Avalanche captain Gabriel Landeskog was given the Stanley Cup trophy to hold first. He was name the Avalanche’s captain as a teenager and put together an incredible season that ended with a championship.

The Avalanche finished with a franchise-record 119 points and were the best team in the Western Conference. Joe Sakic, who was on the team when the Avalanche last won the Stanley Cup title in 2001, put together the team that won this year’s title. He serves as the team’s executive vice president of hockey operations.

The Lightning fought all the way back for a shot at their third title.

Tampa Bay put itself in a position to do something not done since the New York Islanders of the early 1980s – win three straight titles. But it was put on hold as they met their match in the Avalanche.

Tampa Bay Lightning center Steven Stamkos reacts after his goal during the first period of Game 6 of the NHL hockey Stanley Cup Finals against the Colorado Avalanche on Sunday, June 26, 2022, in Tampa, Fla.
(AP Photo/Phelan Ebenhack)