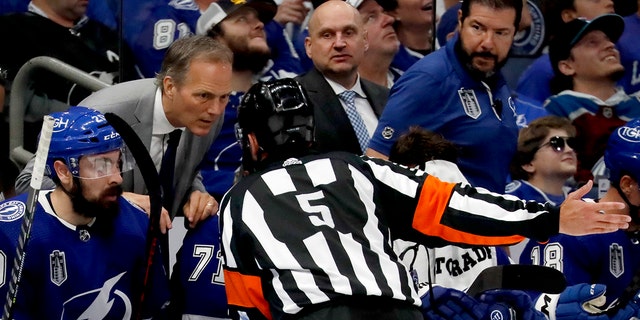 The Tampa Bay Lightning caught a break in the first period against the Colorado Avalanche when an early goal was waved off due to defenseman Bowen Byram being offside.

Lightning coach Jon Cooper challenged the goal after Valeri Nichushkin put one in the back of the net past Avalanche goaltender Andrei Vasilevskiy. After the game, Cooper said he did not think it should be up to the coaches to make the call whether the play should be reviewed.

“I’m a believer — and I don’t know if I’m in the minority on this — but I don’t know if that should be in our hands. If it’s either onside or offside, I just don’t know why I have to make that decision when the stakes are this high,” Cooper said, via ESPN.

“Here’s the issue, and I’ve stated this before. We’re at the mercy of the replays we get. So somebody could unplug something up top, we can have no replays and something that is a black and white call might be missed.”

STANLEY CUP FINAL 2022: LIGHTNING STRIKE BACK WITH GAME 3 BEAT DOWN OF AVALANCHE

Head Coach John Cooper of the Tampa Bay Lightning reacts during the second period against the Colorado Avalanche in Game Three of the 2022 NHL Stanley Cup Final at Amalie Arena on June 20, 2022 in Tampa, Florida.
(Julio Aguilar/Getty Images)

Part of the issue was how long it took for officials to make the call on whether the goal should be reversed, which appeared to be the main takeaway from both sides.

“That’s how close it was. I don’t know how many angles they looked at, but it must have been a bunch for it to take that long,” Cooper said. “At the very end, an angle came in. It was an end zone angle, and I don’t know where we got it from. The guys inside couldn’t tell if it was white [ice] or if it was grainy. And I said, ‘Well, let’s go with the white.”

Avalanche forward Mikko Rantanen added: “I don’t think the [linesman] can drop the puck if nobody is there. I guess he can, but it’s never happened before. Good job by them, waiting, waiting and making sure it was offside. Good for them.”

Will Christians be here for the Great Tribulation & the Anti-Christ? I believe "Yes." Be ready.