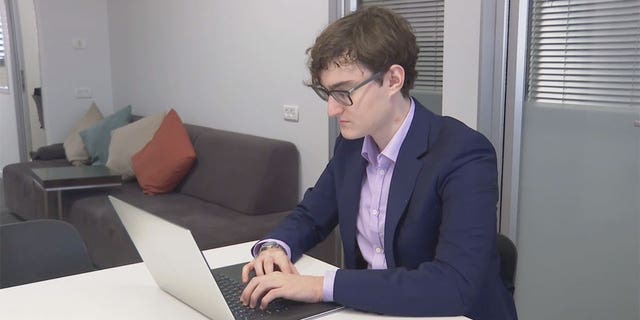 Bernard Moerdler points to his computer screen as an air raid alert pops up.

The 21-year-old student and programmer developed a platform called Ukraine Sirens Alert to keep the world informed as Russia’s invasion grinds on.

The alert system not only warns of incoming missiles, but also provides real-time data on shellings, minefields and other threats that could affect civilians stuck amid the war. Most of the information is collected from government, military and open source information.

“It’s like an octopus with its tentacles all over and gathering all the data into one place, so users can find it in an easy to see location,” Moerdler said.

21-year-old student and programmer Bernard Moerdler says the idea of the platform came to him after his girlfriend’s family members were trapped in Ukraine at the start of the war.
(Fox News)

The idea for the humanitarian project came when Russia started the war with Ukraine in late-February. Moerdler’s girlfriend had family members trapped in the country, desperately looking for ways to stay up to date about the conflict as it unfolded.

That is when Moerdler knew he had to do something to help.

“I really came to an understanding that the systems there are just not sufficient enough and that I could try and make something better. So that’s how I came to creating the system itself,” Moerdler recalled.

A makeshift chapel in the bomb shelter nuns have prepared to take shelter in when air raids go off, at the Hoshiv Women’s Monastery, where nuns have been taking in internally displaced people fleeing the war, in Ivano-Frankivsk region, western Ukraine, Wednesday, April 6, 2022. Mattresses, blankets and benches also line the basement. But even when there are no sirens, children happily use the cavernous underground space.
(AP Photo/Nariman El-Mofty)

Ukraine Sirens Alert has thousands of daily users who also rely on the program to find shelters and Wi-Fi accessible locations on their journey to safer places. On the website, UASA.io, more than 42,000 shelters have already been mapped.

Through the site, Ukrainians can sign up for SMS and email alerts, so they are prepared for incoming fire. Much like the Israeli Red Alert system, which was part of Moerdler’s inspiration, the messages can be lifesaving in the event of an emergency.

21-year-old student and programmer Bernard Moerdler says the idea of the platform came to him after his girlfriend’s family members became trapped in Ukraine at the start of the war.

As Russian attacks increase, the price to alert Ukrainains via SMS message is rising. Moerdler has launched a GoFundMe to help support the project.

“I hope that we are right around the corner from peace and the conflict is over.” Moerdler said. “But until then, I’m going to just keep on going, keep on innovating it, trying to help as many people as possible.”

Trey Yingst currently serves as a foreign correspondent for FOX News Channel (FNC). He joined the network in August 2018.

At What Judgment Does the Tribulation Saints Get Their Rewards

You are so beautiful hulvey Christian rap song

At What Judgment Does the Tribulation Saints Get Their Rewards

You are so beautiful hulvey Christian rap song