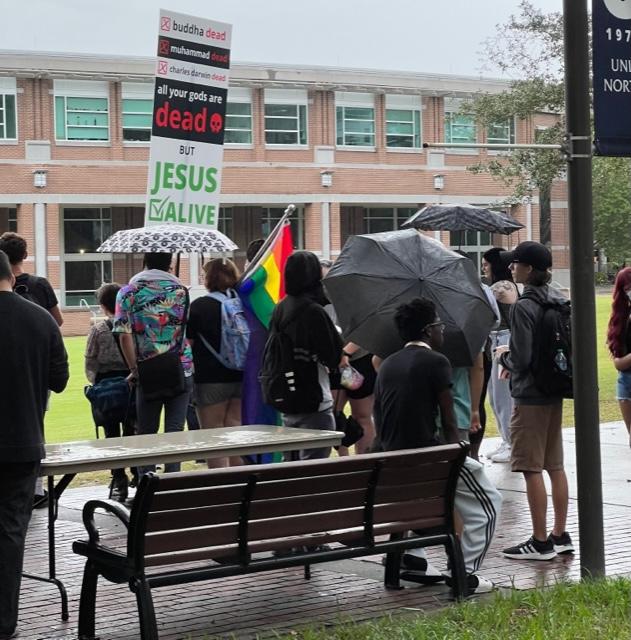 “Misrepresenting the Bible” and “hate speech.”

Those are two phrases University of North Florida (UNF) students used to describe preachers on the Green during an open floor discussion led by the Interfaith Center on Tuesday.

For over four years, the UNF campus has experienced groups of preachers setting up on the Green and voicing their beliefs to students. Infamous for their strong language and what many students believe to be verbal assaults, these preachers were often described as an eye and ear sore by UNF students in the years before the COVID-19 pandemic.

Because of restrictions imposed by the pandemic, the campus was largely left alone by preachers. That was until now, which marked the first large return of the preachers since 2019. Spinnaker saw them set up on the Green on the first day of the Fall 2022 semester.

Sometimes it’s easy to walk past the preachers without a second thought. But some students have recently experienced more extreme interactions with the group, leaving them feeling uneasy and — at times — unsafe.

A student involved with the Interfaith Center shared that her experience with the preachers has made her question her own safety on campus to the point where she considered leaving UNF entirely.

A UNF senior also felt that their safety on campus could be at risk after hearing incidents of preachers following students, especially women, to their residence. They said that they don’t want to feel like they have to carry a weapon in order to feel safe on their own college campus.

The event was led by Matt Hartley, the Interfaith Center’s director. Opening the discussion event, Hartley explained in his opening speech that these preachers, often Christian in name, “are clearly trying to stir up outrage.”

He explicitly mentioned the controversial Sister Cindy from Tik Tok, who visited UNF last semester, as an example of how the campus is no stranger to speakers. For the majority of the event, tables of six-to-seven people were each moderated by a student leader or staff facilitator. Students at these tables shared their stories with the preachers and vented their frustrations about them.

Joseph Gaines, a first-year UNF graduate student,  recalled how the preachers were his “first impression of being on campus.”

First-year undergraduate student Hudson Horne, a self-identified “biblically faithful” Christian, had also seen them on his first day of class.

Fourth-year sociology major Wren Bernstein elaborated on how they had been there during their first year as well, all the way back in 2019. Bernstein explained how the preachers would vary between praising and harassing them based on whether their clothing was “masculine” or “feminine” in nature.

Bernstein also explained how the preachers would harass just about everyone they could, including but not limited to Jews, Muslims and women.

According to Bernstein, “They’re preying on students when they’re most vulnerable.”

Gaines agreed with Bernstein’s description of their tactics, calling it “poaching.”

The Rev. Sarah Locke, Chaplain for the Jacksonville Campus Ministry, also echoed the belief that the preachers reinforce very hateful rhetoric. She also noticed how they appear to have gotten bolder and more organized in their efforts.

She explained how this is just one particular sect of Christianity and that they are “People are claiming to be Christians but doing the exact opposite of what Jesus was teaching.”

Horne and Gaines echoed this statement that the preacher’s efforts were contradictory to actual Christian teachings.

“Just talking to them showed they were blind to the messages of the Bible,” Horne, a Christian himself, remarked.

The Rev. Locke also said she wished UNF would do more to at least condemn the preachers if they can’t remove them, in addition to offering protections for UNF students against them.

“I wish the university would say ‘we don’t agree,’” Locke said of the University’s official response or lack thereof to the preachers.

Everyone else at the table agreed. While UNF does encourage reporting misconduct, many wish they would do more to at least officially warn students of the preachers. They specifically referenced a message sent by President Limayem last week to all students. In it, he restated UNF’s commitment to free expression and civil discourse. Many students said they were frustrated and saw this as an unofficial acknowledgment of the preacher’s right to be there, all the while refusing to condemn or mention them by name.

“They owe students an apology,” Locke demanded of UNF in being legally unable to remove them and not officially condemning or warning students about them.

When the floor was opened to all tables to share their thoughts, Director of Hicks Honors College, Leslie Kaplan, described her tables’ shared opinions of feeling uncomfortable with the preachers, regardless of personal backgrounds.

It was clearly voiced that students want the university to get involved to protect its students by setting boundaries on the Green to make it a safe space again.

Questions of legality were brought up concerning how sometimes the preachers will live-stream their preaches and share them on social media, to which students don’t give their consent. There was a shared interest in how the university will respond to Florida’s law on consent and live-streaming and what actions will be taken to protect students’ rights.

When Spinnaker reached out to UNF regarding the report Limayem was speaking with lawyers, UNF provided this statement:

“President Limayem is aware of the concerns of students, faculty and others related to preachers who come to campus and is having discussions on how best to address those concerns.”

Hartley explained in his opening speech how anyone is allowed to speak on the Green.

“Free speech is protected in an open space on campus as long as it’s not disrupting class or an event,” he said.

The Green is considered an open space, but the campus community does regard it as a safe place on campus to relax and enjoy their time. As Hartley put it, “everything happens on the Green, I had my first kiss on the Green!” he joked.

“Students are feeling that campus life is disrupted in various ways,” Hartley said in an interview after the discussion was over. “Students feel like the Green is less accessible, and some students even feel unsafe due to the campus preachers, so that is some of what we heard today.”

The two-hour-long moderated discussion was held in the Ballrooms of the Student Union and was the Interfaith Center’s first event like this since before COVID-19. They hope to hold more in the future.

For more information or news tips, or if you see an error in this story or have any compliments or concerns, contact [email protected].