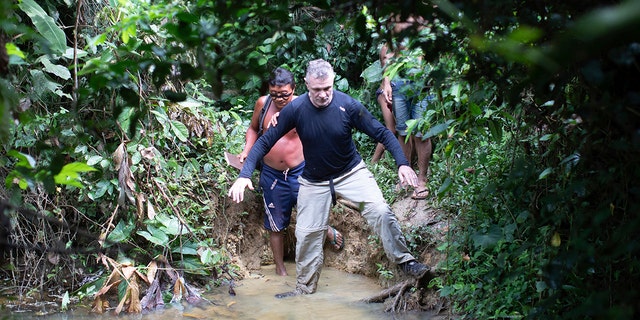 A British journalist and an Indigenous affairs expert are missing in a remote part of Brazil’s Amazon region, and a suspect is reportedly being held in custody in connection with their disappearance.

Dom Phillips, who has been a regular contributor to the Guardian newspaper, and Bruno Araújo Pereira were last seen at 7 a.m. Sunday in the Sao Rafael community, according to the Univaja association of Indigenous people in the Vale do Javari, for which Pereira has been an adviser.

They were returning by boat from the Vale do Javari and bound for the city of Atalaia do Norte, about an hour away, but they never showed up.

Phillips, who currently resides in Salvador, Bahia, has also contributed to The Washington Post and The New York Times. He is writing a book about preservation of the Amazon with support from the Alicia Patterson Foundation, which awarded him a year-long fellowship for environmental reporting than ran to January.

CBS News and Brazilian Report both said a suspect has been identified as Amarildo da Costa de Oliveira, who goes by the nickname “Pelado.” Amazonas state civil police arrested him for allegedly carrying a firearm without a permit but they are holding him in connection with the disappearances.

At the first public press conference since the journalist and guide went missing, Gen. Carlos Alberto Mansur, the state’s public security secretary, said officials do not yet have concrete evidence tying the man to the disappearances, but investigations are ongoing, and five others have been questioned.

Pereira is currently on leave from his post with Brazil’s Indigenous affairs agency, and is one of its most experienced employees operating within the Vale do Javari area. He oversaw the agency’s regional office and the coordination of isolated Indigenous groups before taking leave. He has received a steady stream of threats from illegal fishermen and poachers, and he usually carries a gun.

People take part in a vigil outside the Brazilian Embassy for Dom Phillips and Bruno Araujo Pereira, a British journalist and an Indigenous affairs official who are missing in the Amazon, in London, Thursday, June 9, 2022.
((Victoria Jones/PA via AP))

Univaja said the two had been threatened during their current reporting trip. They disappeared while returning from a two-day trip to the Jaburu Lake region, where Phillips interviewed local Indigenous people, according to Univaja. Only the two were on the boat, according to the association.

The place where they disappeared is the primary access route to and from the Vale do Javari, where several thousand Indigenous people live in dozens of villages.

People in the area say that it is highly unlikely they would have gotten lost in that sector.

The Guardian quoted a spokesperson as saying the association “is very concerned and is urgently seeking information about Mr. Phillips’ whereabouts and condition. We are in contact with the British embassy in Brazil and local and national authorities to try to establish the facts as soon as possible.”

“He is a cautious journalist, with impressive knowledge of the complexities of the Brazilian environmental crisis,” Margaret Engel, the Alicia Patterson Foundation’s executive director, wrote in an email to the Associated Press. “And he is a beautiful writer and a lovely person. The best of our business.”

Brazil’s federal public prosecutors said in a statement that they have opened an investigation and mobilized the Federal Police, Amazonas state’s civil police, the national guard and the navy. The latter will coordinate search efforts, according to the statement. In a statement, the navy said it was dispatching a search and rescue team. The army’s footprint and manpower is far greater than the navy’s in the region.

“I hope they are found soon, that they are fine and safe,” former President Luiz Inácio Lula da Silva posted on Twitter, while recalling Phillips interviewing him in 2017.

The Vale do Javari region has experienced repeated shootouts between hunters, fishermen and official security agents, who have a permanent base in the area, known for having the world’s largest population of uncontacted Indigenous people. It is also a major route for cocaine produced on the Peruvian side of the border, then smuggled into Brazil to supply local cities or to be shipped to Europe.

In September 2019, an employee of the Indigenous affairs agency was shot dead in Tabatinga, the largest city in the region. The crime was never solved.

“It is extremely important that Brazilian authorities dedicate all available and necessary resources to the immediate realization of searches, in order to guarantee, as soon as possible, the safety of the two men,” Maria Laura Canineau, the director of Human Rights Watch in Brazil, said in a statement on Monday.

Journalists working for regional media outlets in the Amazon have been murdered in recent years, though there have been no such cases among journalists from national media nor foreign media. However, there have been several reports of threats, and the press has limited access to several areas dominated by criminal activity including illegal mining, land-grabbing and drug trafficking.

Grandparents can no longer visit grandchildren without

Guess Who's #1 On The Christian Gospel Music Charts…