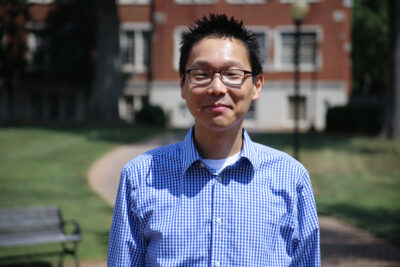 The history of the Presbyterian Church (U.S.A.) is deeply entwined with the violence and inhumanity of slavery – and with a history of anti-Black racism that allowed White Presbyterians to offer a theological rationale for the degradation and abuse they perpetuated.

That’s the ugly history that William Yoo, an assistant professor of American religious and cultural history at Columbia Theological Seminary, excavates in his new book What Kind of Christianity?  A History of Slavery and Anti-Black Racism in the Presbyterian Church, just released from Westminster John Knox Press.

As Yoo led members of the Presbyterian Mission Agency board and staff in a Sept. 29 discussion of his book in Stony Point, New York. Some church leaders present said the shadows of inequality and racism he laid bare are still all too visible in the church today.

“It took me 30 days to get through Chapter 1 because I was so traumatized” by what Yoo wrote, said Denise Anderson, a former General Assembly co-moderator and now acting director of racial equity and women’s intercultural ministries at the Presbyterian Mission Agency (PMA).

It’s not just the past – while reading the book, “I saw the church” in 2020, when the assembly refused to take up a report on disparities experienced by Black women and girls.

In 2022, Black Presbyterian witness “is as weak as it has ever been,” Anderson said. “Judgment will come upon this church. God has been far too patient with us.”

If an African American had written this book instead of a Korean-American, “it would have been resisted and rejected out of hand,” said Gregory Bentley, another former General Assembly co-moderator. This is a kairos moment for the PC(USA) — the time to do the urgent work of repentance and repair, Bentley said. “The window of opportunity is closing for us to do right.”

Yoo starts his book with a quote from womanist theologian Katie Geneva Cannon, the first Black woman to be ordained as a minister in the PC(USA), who asked:

“Where was the Church and the Christian believers when Black women and Black men, Black boys and Black girls, were being raped, sexually abused, lynched, assassinated, castrated and physically oppressed? What kind of Christianity allowed white Christians to deny basic human rights and simple dignity to Blacks, these same rights which had been given to others without question?”

Yoo gave some answers — challenging the board to consider both the realities of the historical record and the implications of that for the mostly-White PC(USA) today.

The most obvious answer to Cannon’s question, he has written, is “the wrong kind of Christianity” – but the kind that White Presbyterians often have practiced. He contends that Whites in the centuries of enslavement did understand the atrocities involved. It’s not a matter of thinking that if they just interpreted the Bible differently, they would have acted differently. He wrote that “Presbyterians in the United States were among the most proslavery of all religious groups and consequently among the most responsible for centuries of oppression against millions of Black Americans.”

Some of Yoo’s findings are these.

Presbyterians refused to denounce slavery. When given a chance to stand against slavery, Presbyterians wouldn’t. At the 1836 General Assembly in Pittsburgh, Chillicothe Presbytery sent a letter calling enslavement of Blacks a “heinous sin and scandal” and demanding action against slave owners, including being barred from receiving communion. A committee considering the issue responded with a majority report explaining in only 211 words that to take a stand either defending enslavement or supporting emancipation would be divisive. The committee postponed action several times to deal with an unrelated disciplinary matter involving a White male minister. In the end, the assembly voted to “indefinitely postpone” a vote on the matter, determining that the PC(USA) constitution could not bind the individual conscience.

Among those who voted against the postponement:

Presbyterians owned slaves. In 1845, Frederick Douglass wrote in his autobiography about the difference between genuine Christianity and the “corrupt, slave-holding, women-whipping, cradle-plundering, partial and hypocritical Christianity of this land” – a criticism that “is certainly true of Presbyterianism,” Yoo wrote.

White ministers, congregations and church members all were enslavers. Based on available data, Yoo estimates that in 1860, from 50,000 to 75,000 White Presbyterians were enslavers.

“Some of these Presbyterians, including ministers, are guilty of committing acts of physical, psychological, sexual and spiritual abuse against enslaved persons,” Yoo wrote — citing as one example Elizabeth Keckley, who was enslaved by a Presbyterian family; beaten severely when she was four; endured an anguished parting from her father when he was separated from his family and sent West; was whipped by a White minister with whom she was forced to live; was stripped naked by a school principal who was a member of the minister’s congregation; was raped and impregnated by a White man.

A church journal called out Columbia Theological Seminary, then in South Carolina, for collecting money from a public auction of enslaved persons – “Charles, Peggy, Antonett, Davy, September, Maria, Jenny, and Isaac,” listed in a Savannah newspaper as property being sold and with the seminary as receiving the proceeds.

Presbyterians weren’t abolitionists. At least, relatively few were — and those who were tended to either leave the Presbyterian church or be marginalized within it, Yoo wrote.

In addition to documenting Presbyterians’ direct involvement with enslaving Black people, Yoo also traces the ongoing legacy and impact of that history – its impact on White Americans and churches today.

He cites the work of James M. Loewen, a sociologist who argued that history textbooks tend to present slavery as some kind of “uncaused” tragedy — rather than teaching students about the cruelty and intentionality of the enslavers. “When moving from high school classrooms to seminary and Sunday school classrooms, the miseducation on slavery is no less a problem,” Yoo wrote — describing “the glaring omission” of the role that White Christians played.

In his presentation, Yoo highlighted for the board three specific incorrect interpretations “that have led us astray for centuries.”

In reality, the greatest tragedy from this period of history was not church schism but “the perpetration of atrocities … upon millions and millions of Black Americans,” Yoo told the PMA board.

“It was a sin for our church not to separate sooner.”

Yoo began his presentation with a discussion of the purpose of land acknowledgments — a practice in which groups meeting acknowledge the original Indigenous inhabitants of the land where they have gathered, and the violence and cost inflicted when Whites took that land away.

Yoo, who lives in Georgia, spoke of the “age of Indigenous deportation” of the Cherokee and other Native people from Georgia following the Indian Removal Act of 1830 — a forced march of exile over the Trail of Tears through which thousands died of starvation, disease and exposure.

It’s not enough to say these are “stolen lands,” said PMA board member Ximena Leroux – what’s needed is reparations, payment for what was taken. As Yoo put it: “Where is the remorse and the confession?”

Anderson asked later: “When we pray the Prayer of Confession (in the Sunday liturgy), what are we really doing? … It feels like we’re faking. We’re just playing church. White church.”

Choosing reparations would require real changes for people who hold positions of power in congregations and mid councils, Leroux said — some of whom have “idolatrous attachment” to church endowments and lands, who benefit from capital built from stolen wealth. “There are still a lot of people who are not willing to let go.”

Diane Moffett, PMA’s president and executive director, attached a name to “the land theft” from Indigenous people, to “the grabbing, the kidnapping of Black labor. … We’re dealing with evil. It’s E-V-I-L.”

Chris Roseland, acting senior director of mission engagement and support, said one of his first calls as a pastor was in Mississippi, where he pushed his congregation to talk about racism and was told: “This is supposed to be a Bible study, not a sociology class.” He was quickly labeled a liberal. “So much of this is cultural,” Roseland said. “So much of it is fed from one generation to the another. It’s ignorance by choice.”

SanDawna Gaulman Ashley, a PMA board member, said she wants to know “when we as a denomination will take the next steps” — to require, for example, diversity, equity and inclusion training for church leaders. “I don’t want to talk about it again and again and again,” Ashley said. “I’d like to see our denomination moving forward clearly into what it professes.”

Yoo spoke of “the captivity of the White pulpits” during the 1800s that kept many ministers from denouncing slavery.

Michelle Hwang, who with Shannan Vance-Ocampo serves as co-chair of the PMA board, said ministers today need to stop being silent about racism in their communities and congregations. “So many of my colleagues in parish ministry are afraid to speak the truth,” afraid of losing their jobs, Hwang said. When she has done so, “I have had so much pushback” from congregants who aren’t comfortable taking a stand for social justice.

“Are we going to live the gospel,” Hwang asked – or stay with what’s “comfortable and safe?”

But silence brings its own cost, said Shavon Starling-Louis, co-moderator with Ruth Santana-Grace of the 2022 General Assembly. “Our children are watching us. What we’re not saying is as important as what we are saying.”