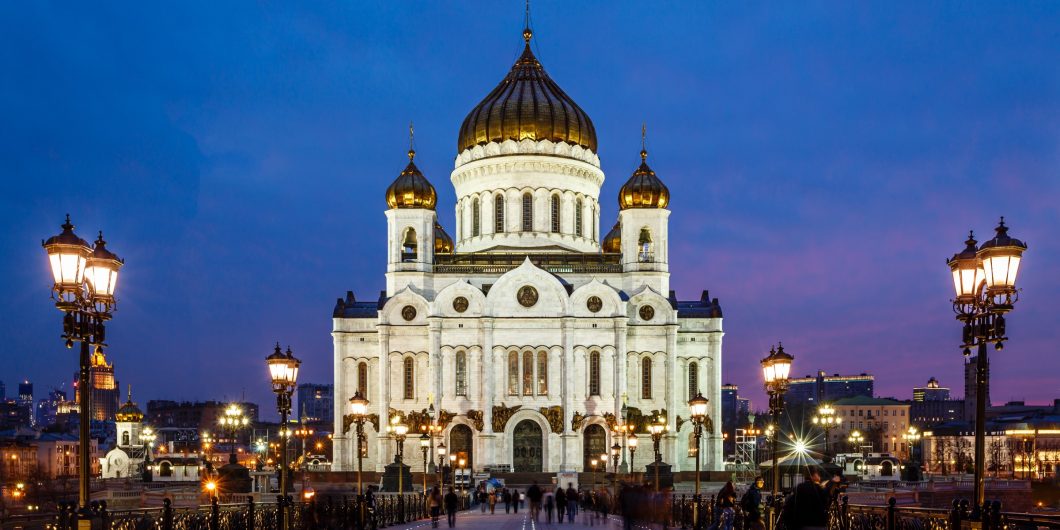 On Sunday, February 27, 2022, Patriarch Kirill of Moscow and All Russia preached a sermon in the Cathedral of Christ the Savior in Moscow in which he prayed for peace in Russian lands, explicitly including Ukraine, Byelorussia, and Russia. “God forbid that the present political situation in fraternal Ukraine so close to us should be aimed at making the evil forces that have always strived against the unity of Rus’ and the Russian Church gain the upper hand.” On this account, Ukraine has fallen under the influence of “dark and external forces,” who have been given an opportunity to “laugh” at the Russian peoples. The only appropriate response, he argues, is to “preserve peace between our peoples while protecting our common historical Motherland against every outside action that can destroy this unity.” What matters most in the conflict, then, is not the battle between democracy and authoritarianism but reuniting a common people and their common faith. The history of the cathedral in which he spoke makes his words endorsing an invasion ring with irony.

It was only natural that the first public performance of Tchaikovsky’s 1812 Overture would take place at the Cathedral of Christ the Savior. It had been composed to commemorate the 1812 Battle of Borodino, so memorably chronicled in Tolstoy’s War and Peace, in which Russian forces under the command of General Kutuzov made a brave stand against the great French army commanded by Napoleon. Although the French prevailed in the battle, the French forces soon found Moscow abandoned, and instead of negotiating terms of surrender with Czar Alexander I, Napoleon found himself in a metropolitan wasteland, which just 48 hours later was transformed into a conflagration, burning most of the city to the ground. With supply lines stretched to the breaking point and facing the brutal Russian winter, Napoleon had no choice but to retreat, returning home with a force reduced from 600,000 to perhaps 120,000 men. Russia was saved, and the world learned that the French commander was not invincible.

After the French retreat, Alexander I declared his intention to build a cathedral “To signify our gratitude to divine providence for saving Russia from the doom that overshadowed her. . . . May the almighty bless our intentions. May our intentions be fulfilled. May the cathedral stand for many centuries.” When Nicholas I succeeded his brother, he changed both the site and the design, and the cornerstone was finally laid in 1839. The cathedral would take four decades to build, drawing the efforts of the best architects, builders, and artists of the day, and it was finally consecrated in 1883. Standing nearly 340 feet tall, it included a vast dome that had been gilded using the new technique of electroplating. The first floor of its gallery was devoted to the Russian victory over Napoleon, with plaques noting the battles and commanders of the war. Although inspired by a historical event, the cathedral became a highly visible symbol of the faith of the Russian people.

Then things changed. Following the revolution of 1917, atheism became the official doctrine of the Union of Soviet Socialist Republics. Criticisms of the cathedral quickly appeared in the state-controlled press, branding it a “poisonous mushroom on Moscow’s face” and “a source for slothfulness.” Campaigns against religion in the 1920s further eroded its standing. In 1924, Lenin’s successor, Joseph Stalin, announced a plan to replace the cathedral with a convention center to be known as the Palace of the Soviets, a work of modern architecture crowned not by a cross but a massive statue of Lenin. It would house sessions of the Supreme Soviet and was planned to be the world’s tallest structure. Beyond Soviet political leaders’ monumental ambitions, the fate of the cathedral was sealed by two additional factors: its prime location and the fact that, strapped for funds, the Soviet government, which was undertaking a huge program of industrialization, needed the gold that had been plated onto the dome, estimated at 20 tons.

In 1931, an order was issued for the cathedral to be closed, the gold removed, and the structure dismantled. Despite intense efforts, the work proceeded more slowly than expected, and the decision was made to demolish the structure with explosives. Thereafter, it took more than a year for the rubble to be removed. Yet construction of the Palace of the Soviets barely got off the ground. Boreholes were drilled and a portion of the steel frame of the building was erected. Soviet media was flooded with images of the completed project. Yet adequate funds for construction were never forthcoming, and with the new decade of the 1940s, Germany invaded the USSR. The project was halted indefinitely, builders diverted into military service, and the steel repurposed for bridges. Instead of a grand new edifice, all that remained was a huge hole in the ground. During the Khrushchev years of the late 1950s, it transformed into a huge open-air swimming pool.

In 1990, after the fall of the Soviet Union, the Russian church received permission to rebuild the cathedral, garnering financial support from perhaps as many as one million Muscovites. The swimming pool was closed in 1994, and in just six years, the new Cathedral of Christ the Savior was consecrated in 2000. The cathedral has since served as the venue for many notable events, including the 2000 canonization of Czar Nicholas II and his family, the laying in state of deceased Russian president Boris Yeltsin in 2007, and a 2012 unsanctioned performance by the punk rock group Pussy Riot, which protested the Russian church’s support of Vladimir Putin by singing, “Virgin mother of God, drive away Putin!” The cathedral was the logical place for the protest because Patriarch Kirill had recently supported Putin’s reelection in 2012 and even praised him for “rectifying the crooked path of history.” The members of Pussy Riot, by contrast, described him as “a man who is as far as can be from God’s truth.”

The Cathedral’s story offers timeless lessons about the relative merits of building from the top down and from the bottom up. The original structure rose organically from a pivotal moment in the history of an entire people. Napoleon was not merely a military conqueror but the harbinger of Western culture, whose initial incursions which into Russian life could be traced to Peter the Great. Peter sought to modernize and Europeanize Russian civilization overnight, appointing European advisors, making western dress compulsory, and erecting a new, western-style capital, St. Petersburg. It was a planned city, contrasting sharply with the slow, organic growth of Moscow over centuries. Like Peter, Napoleon thought that genius and sheer willpower could remake the world overnight. By contrast, Tolstoy’s hero, General Kutuzov, realized that the old, diverse, and deeply rooted culture of Russia, including people, terrain, and even climate, represented the nation’s true identity and best defense.

The original cathedral was completed not merely because Alexander I decreed it, but because it reflected the will of many people. Bringing it to fruition in fits and starts over the course of decades, the people were not only recalling a great event in history but testifying to a faith that they hoped would guide the nation’s future. Political and military figures come and go, but faith abides. Tolstoy and Tchaikovsky expressed this spirit. The publication of War and Peace catalyzed a host of new cultural works, and the 1812 Overture, with its chimes, brass fanfare, and cannon fire, has become a rallying call for patriots around the world. Like the commemoration of the liberation of the Israelites from Egyptian bondage or the war of independence of the American states against Britain, the War of 1812 served as a defining moment in Russian identity. The original cathedral’s sculptures and frescoes recalled not only Napoleon’s defeat but the intercession of saints on behalf of the people over 900 years of Russian history. Again and again, historical figures were depicted as instruments of divine purpose.

The demolition of the cathedral and the faith it grew out of represented a far different conception of history. The members of the politburo saw people and culture as putty in their hands, to be refashioned at will into whatever shape they chose to impose. Like Peter and Napoleon, they thought they could rationalize society in their own image. A materialist ideology could have no truck with an immaterial God, could not tolerate the existence of a rival object of veneration and loyalty, and regarded churches as little more than dens of idleness that accomplished nothing and consumed too much of the people’s time and attention. In its place, they would erect a Leviathan, a monument to their own ideology, crowned by Lenin’s massive statue. When they looked at the cathedral, they saw not transcendent ideas but raw materials for state plans—gold to finance industrialization and marble for the walls of train stations. Deep insight on the Soviet state lies in the fact that it took over a year to clear the rubble and that, after the war, there was no energy left for rebuilding.

Of course, the Palace of the Soviets was never constructed. Reduced to a massive pile of rubble, soon nothing was left at the original cathedral’s site but a big hole in the ground. Perhaps accidents of history, such as World War II, are to blame. Or perhaps cultures and peoples are not so easily melted down and recast. What did finally arise at the site was not a monument to Leninism but a reborn cathedral, financed less by government budgets than private companies and citizens. Rebuilt, it served as the site for and helped to catalyze a reconciliation with the legacy of the Romanovs, homage to a political leader who pronounced the death of a moribund communist government, and a radical act of political protest. The incursion of punk rockers Pussy Riot into this grand house of worship may have seemed little more than an anarchistic outburst, but in fact, it represented a call to the church and its leaders to subordinate political loyalty to a deeper truth. The intruders were, in this case at least, acting as its defenders. Once again, the people had spoken.

Can a Dream Tell us of the Future | Types of...