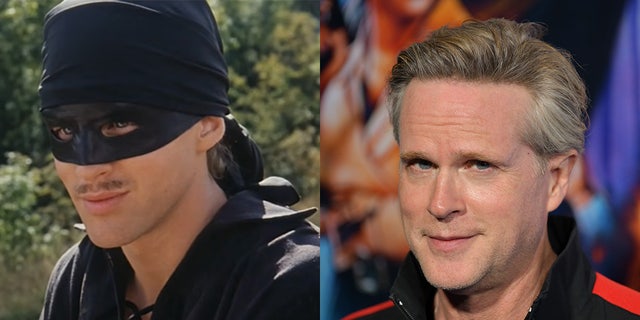 It has been 35 years since “The Princess Bride” first hit theaters.

While the film was not a huge box office success when it first premiered, it has since become a cult classic with girls everywhere wondering when they would find their Westley.

Here is what the cast has been up to since the release of the film, which is based on the 1973 novel.

Cary Elwes’ breakout role was Westley in “The Princess Bride.” He later got the starring role in the first installment of the horror franchise “Saw.”
(20th Century Fox/Getty Images)

Cary Elwes had a few film credits to his name before being cast as Westley in “The Princess Bride.” After the success of the film, Elwes continued to work as an actor on a consistent basis, starring in the Academy Award-winning film, “Glory,” and as Robin Hood in Mel Brook’s adaptation of the popular fairy tale, “Robin Hood: Men in Tights.”

He continued to work steadily throughout the 90s and in the early 2000s. In 2004, Elwes starred in two very different films, the first installment of the horror film “Saw” and the children’s movie “Ella Enchanted.” He reprised his role in the “Saw” franchise in 2010 for the seventh film in the series.

Throughout the 2000s, Elwes worked in television, with guest spots on “Seinfeld,” “Law & Order: SVU,” “Psych” and the TV movie, “The Riverman,” in which he portrayed Ted Bundy. In 2018, Elwes joined the cast of “Stranger Things” for its third season as the mayor of Hawkins.

Elwes met his wife Lisa Marie Kurbikoff in 1991 at a chili cook-off, and they have been married since 2000, They have one daughter together.

Robin Wright got her start on “The Princess Bride,” and her career picked up in a major way afterwards. She was cast as Jenny in “Forrest Gump” not too long after, earning a Golden Globe nomination.
(20th Century Fox/Getty Images)

Robin Wright’s career exploded after she was cast as Buttercup in “The Princess Bride.” Her breakout role in the movie led her to get cast in “Forrest Gump” as Jenny, Forrest’s best friend who goes down the wrong path in life. The role of Jenny earned her a Golden Globe nomination

She continued acting throughout the 90s and 2000s, in films like “White Oleander,” “A Home at the End of the World,” Moneyball” and “The Girl with the Dragon Tattoo.” Wright also had some TV roles, in shows such as “The Yellow Rose” and “Empire Falls.”

In 2013, Wright began her portrayal of Claire Underwood in “House of Cards” alongside Kevin Spacey. Claire was the first lady to Kevin Spacey’s president, eventually becoming president when Spacey left the show in its final season. Spacey was fired in 2018 following alleged sexual misconduct behind the scenes of the political drama.

Wright went on to earn five consecutive Emmy nominations for her portrayal of Claire.

Wright and Sean Penn met in 1989 and had their daughter Dylan Frances Penn in 1991. After breaking up and getting back together a few times, they got married in 1996, but filed for divorce in 2009. Their divorce was finalized in 2010. In 2017, she began secretly dating Saint Laurent executive Clément Giraudet. The two had a secret wedding in France in 2018.

After starring in “The Princess Bride,” Chris Sarandon provided the voice of Jack Skellington in Tim Burton’s “A Nightmare Before Christmas.”
(20th Century Fox/Getty Images)

Chris Sarandon had a successful career on the stage and in film before he took the role of Prince Humperdinck in the 1987 classic “The Princess Bride,” with a Golden Globe and Academy Award nomination under his belt.

During his career, he was also the voice for Jack Skellington in Tim Burton’s “A Nightmare Before Christmas” in 1993. He reprised his role of the Pumpkin King on several occasions such as Halloween events at Disneyland, including providing his voice for the Haunted Mansion ride at Disneyland.

He returned to the stage in 1991 for a short-lived musical, and then again in 2006 when he played Signor Naccarelli in “The Light at the Piazza.” His latest return to the stage was in 2016 when he acted in the off-Broadway play, “Preludes,”

Sarandon was married to actress Susan Sarandon for 12 years, divorcing shortly after “The Princess Bride” was released. He married a second time in 1980, welcoming two daughters and a son with his second wife, before getting another divorce in 1989. In 1994, he married his third wife, Joanna Gleason, and they are still together.

Fred Savage starred in “The Wonder Years” from 1988 until 1993 and was nominated for two Golden Globe and Emmy Awards at the age of 13. He has come under fire recently for accusations of inappropriate behavior.
(20th Century Fox/Getty Images)

Fred Savage had a few television credits to his name prior to landing the role of The Grandson on “The Princess Bride” in 1987. He played the little boy who was home alone sick, hearing the story about Buttercup, Westley and Humperdink for the first time. Even though it was a kissing book, he enjoyed it.

After starring in “The Princess Bride,” Savage landed the leading role of Kevin Arnold on the television show, “The Wonder Years.” The show ran from 1988 until 1993, becoming the youngest person to be nominated for a Golden Globe and Emmy Award, with two of each nomination, at the age of 13, for his work on the show.

During this time, and after, he starred in several films, including “Vice Versa,” Little Monsters” and “Austin Powers in Goldmembers.” He made an appearance on his brother Ben Savage’s show “Boy Meets World” as a professor who hits on the main character’s girlfriend. In 2017, he joined the cast of the Netflix show, “Friends From College.”

While filming the last season of “Wonder Years,” Savage was sued by a member of the crew on accusations of verbal and sexual harassment. The case was settled out of court, however years later, similar accusations were made against the actor. In 2018, a crew member on Savage’s show “The Grinder” sued, alleging assault and battery on Savage’s part against her. Savage denied the accusations and the case was dismissed in 2019.

Most recently, Savage was fired from “The Wonder Years” reboot after an investigation into his actions was initiated after three accusations of inappropriate behavior were made to ABC against him. Once again, he denied the allegations.

André René Roussimoff, better known as Andre the Giant, got his start as a wrestler, his main storyline being his feud with Hulk Hogan.
(20th Century Fox/Getty Images)

André René Roussimoff got his start in entertainment in the early 1960s as a wrestler in France, and was recruited into the profession because of his tall stature and muscular build. As a wrestler, he earned the stage name “Andre the Giant,” which is what he is known as. He took on the role of Fezzik in “The Princess Bride” in 1987 when trying to restart his acting career.

While Fezzik was his most famous acting role, he is also a very accomplished wrestler who played a huge role in the sport from 1964-1991. One of Roussimoff’s biggest storylines during his time in wrestling, was his feud with Hulk Hogan. He and Hogan came head-to-head multiple times throughout the years, their most famous match being when Hogan managed to body slam the 520-pound Roussimoff to win the match.

Throughout 1990-1991 Roussimoff began taking a step back from wrestling, making more sporadic appearances until making his full return in April 1991. Not too long after, his knee was injured during a match, and he made his final appearance in August 1991 at SummerSlam on crutches.

Roussimoff had one daughter, Robin Christensen. On Thursday, January 28, 1993, Roussimof passed away in Paris due to congestive heart failure. He was 47.

Mandy Patankin is an established Broadway actor with many Tony Award nominations under his belt.
(20th Century Fox/Getty Images)

Prior to starring in “The Princess Bride,” Mandy Patankin was an established stage actor, having been nominated for a number of Tony Awards. He also had a few film roles to his name, but Inigo Montoya is his most loved by fans. He continued to work in both film, television and on the stage throughout the years.

In 1994, Patankin was cast in the hit show “Chicago Hope,” winning an Emmy Award for his performance. He left the show in season 2 for personal reasons, returning in 1999 for its sixth season before its cancelation the next year. Throughout the 2000s, he made numerous appearances as a guest on various TV shows before getting a leading role in “Criminal Minds” in 2005. He was only on the show for two seasons however, choosing to leave ahead of the third season due to creative differences.

He made his return to Broadway in 2000 in “The Wild Party,” for which he earned another Tony Award nomination. From May to June 2010, Patankin starred in the musical “Paradise Lost” in London. He made his return to TV in 2011 alongside Claire Danes, in Showtime’s hit show “Homeland.” He was on the show until its final season in 2020.

Patankin married his wife Kathryn Grody in April 1980, and the couple share two sons. While acting on “Homeland,” Patankin visited Greece to help refugees from Syria, saying he hopes to better the system in place when it comes to refugees and how they are treated. In 2020, he and his son Gideon began posting videos of themselves on social media, which went viral.

Wallace Shawn reportedly got the role of Vizzini in “The Princess Bride” because the casting director liked the way he said the line “inconceivable” in the film “My Dinner with Andre.”
(20th Century Fox/Getty Images)

Wallace Shawn is a playwright whose plays have captivated audiences, and he appeared in a few films prior to “The Princess Bride,” making his debut in 1979’s “Manhattan” alongside Diane Keaton. It is said he got the role of Vizzini after the casting director saw him in “My Dinner with Andre” and liked the way he said the line “inconceivable.”

He is best known for his roles in “Strange Invaders” and “Clueless.” However, he has also appeared in films like “The Haunted Mansion,” “Vanya on 42nd Street,” “The Incredibles” and “Book Club.” Shawn also appeared in television shows in both guest and recurring roles. He was a recurring character in “Gossip Girl,” “Star Trek: Deep Space Nine,” “The Good Wife” and “Young Sheldon.”

Shawn also provided his voice for animated films, including all the “Toy Story” films, “Monsters Inc.” and “A Goofy Movie.” As a playwright, three of his plays were adapted and made into films. The films include, “The Designated Mourner,” “Marie and Bruce” and “The Fever.”

Christopher Guest partnered with Eugene Levy to write a number of films including “For Your Consideration” and “Mascots.”
(20th Century Fox/Getty Images)

Christopher Guest’s career started in the 1970s in the theater, but he quickly transitioned into film and television. Before appearing in “The Princess Bride,” Guest starred in “This Is Spinal Tap.”

In the 1990s, Guest started a partnership with Eugene Levy, and together they wrote many films together. Their films together include “Waiting for Guffman,” “Best in Show,” “For Your Consideration” and “Mascots.” He also starred in the 2009 film “The Invention of Lying” and returned to his role of Count Rugen in 2020 for “The Princess Bride Reunion.”

In 1996, Guest became the 5th Baron Haden-Guest after the death of his father. He was a member of the British House of Lords until a law passed banning him from his seat.

God’s word, flat-earth, and inerrancy; What is the Bible allowed to get wrong?