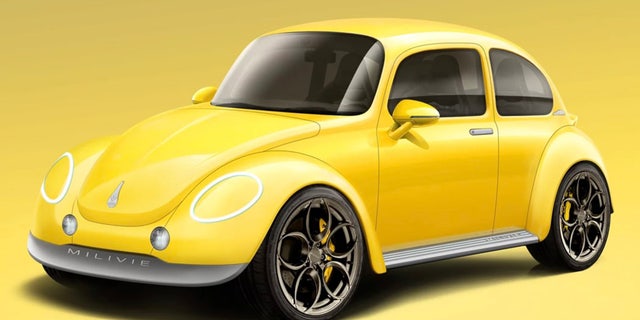 The Volkswagen Beetle is an economy car no more.

German outfit Milivié Design is offering restored and modernized versions of the original VW Bug for $600,000, but there’s a reason for the hefty price tag.

The Milivié 1 starts with a Super Beetle donor car, but only a small portion of the chassis is retained.

Milivié replaces the entire body with a slicker-looking version that manages to stay more true to the original than VW’s own attempts at resurrecting the Beetle in recent years.

The Milivié 1is a modernized version of the VW Beetle.
(Milivié Design)

A ducktail spoiler adds some classic Porsche inspiration to the mix.

The interior gets a more dramatic refresh. It retains the Beetle’s Spartan aesthetic, but features a widescreen digital display in place of the iconic single round gauge.

Its official horsepower has not yet been announced, but it drives the rear wheels through a four-speed automatic transmission shared with older Porsche 911 models.

The Milivié 1 body is all-new, but stays close to the original’s.
(Milivié Design)

Reservations are currently being accepted, but the list is a short one. Milivié Design is limiting production to 22 cars in honor of the nearly 22 million Beetles that were sold during its six-decade run.

What Happens After We Die? | Now You Know