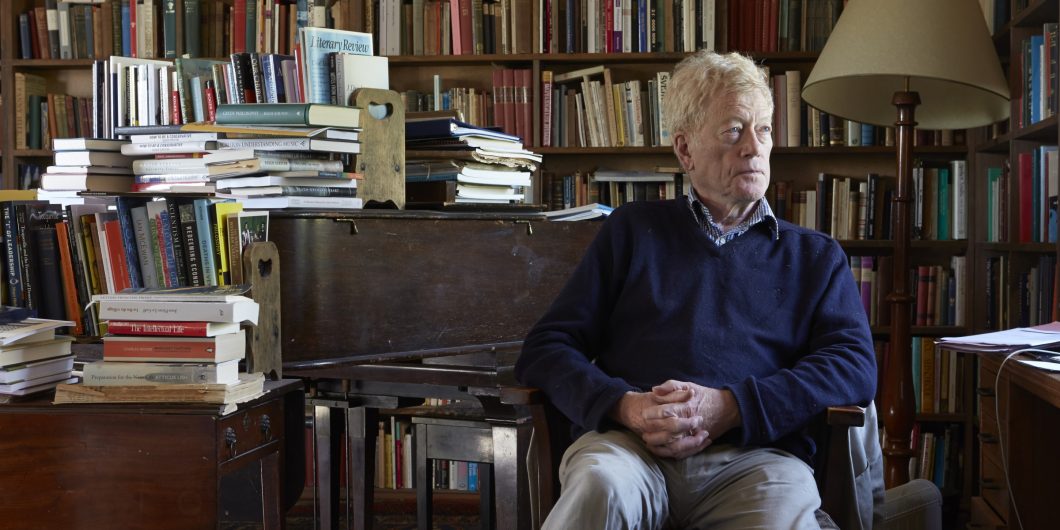 The shortest essay in the recently rereleased collection, Confessions of a Heretic, is entitled “Effing the Ineffable.” In it, the late Roger Scruton speaks of the brief and indescribable glimpses we human beings are sometimes afforded of a world of meaning that seems to exist on a plane just outside of our reach. In these moments arising from contemplation or from the experience of great beauty, we sense that the deep mysteries of existence are somehow brought before our eyes, but they still defy our attempt at understanding. “When they occur it is as though, on the winding ill-lit stairway of our life, we suddenly come across a window, through which we catch sight of another and brighter world—a world to which we belong but which we cannot enter.”

The length of the essay, a mere four pages, is not incidental. Its message is that we can neither pass through that window nor describe in words what exists on the other side: Let all mortal flesh keep silence. Or as he puts it, channeling Wittgenstein, “that whereof we cannot speak, we must consign to silence.”

Appropriately, then, Scruton put his ink to use examining the world inside the window. It is an imperfect and constrained world, populated by others who often get in the way of satisfying our own immediate desires. But it is our home nonetheless—a place to be cherished, protected, and enjoyed, even as we sense that it is but one part of a great, ordered cosmos that we cannot fully apprehend.

Few conservative voices over the past half-century have been as important as Scruton’s. His appeal should be obvious to anyone who has cracked the spine of one of his books on politics, philosophy, aesthetics, architecture, music, or religion. One thing that put Scruton head and shoulders above most other conservative intellectuals was his ability to write so thoroughly and powerfully about all of these subjects, often weaving them together into a magnificent whole. As Douglas Murray observes in his short introduction to the new edition, “While other people might have been able to have written one of his books, who else could have written them all?”

The collection admirably displays Scruton’s breadth, ranging from the love of animals to the proper understanding of the nation; from modern art to our inevitable confrontation with death. One common thread is the titular heresy. Throughout, Scruton challenges the reigning orthodoxies of the day—the modern prejudices and behaviors of both high culture and everyday life.

Many of these contemporary diseases spring from the intense and pervasive desire to create a perfect world for ourselves rather than embrace our contingent and limited place in the world we have. The example that penetrates most into our daily lives is our desire to live in the flattened, frictionless world of the internet. In “Hiding behind the Screen,” he shows that our online dysfunction stems from the sense that we can live a life entirely of our own making. Our online “friends” can be deleted, our interactions abruptly turned off. I can “mute” another person’s voice, and “block” his ears. I am able to create exactly the kind of image of myself that I want the world to see—even if it bears no resemblance to the human being that I am.

All of these features of the online world reveal a generation trying to run away from the vulnerabilities of human life. Face-to-face interaction reveals our limits, for my own will must interact with, engage, and sometimes give way to that of someone else. This reality pushes people online because they fear the judgment of others, accountability for their own words and actions, or the potential for embarrassment. Such risk-aversion, however, stifles our most human qualities. It is an attempt to hide from the fact that we are moral and rational creatures. Without true, vulnerable interaction with the minds and wills of others, we cannot experience genuine friendship or love; we cannot seek truth or recognize justice. We cannot find the contentment that comes with accepting our human condition because we are busy trying to create a world that exists only for ourselves.

Scruton’s criticism of suburban life also hinges on this attempt to create a world that is all my own—that meets my needs and desires while never demanding the “I” become a “We,” as it can when human community develops spontaneously around our need for one another. Our sprawling suburbs abandon “the true goal of settlement, which is the human community in a place that is ‘ours’, rather than individual plots scattered over a place that is no one’s.”

The experience of beauty—one of the fleeting glimpses through the window—cuts against this modern drive. “Beauty tells you to stop thinking about yourself, and to wake up to the world of others. It says, look at this, listen to this, study this—for here is something more important than you are.” For those who no longer believe in the possibility of beauty, however, art becomes an expression of oneself and a way to gratify the ego. He therefore describes the contemporary art community as one obsessed with constructing its own, artificial world that satisfies egos, takes more pleasure in possessing art than in learning from it, and pompously excludes anyone not initiated into its synthetic rites.

The most provocative essay of the collection, “Dying in Time,” takes this picture of human life to its ultimate end. In an age in which we extend bodily life at all costs, we rarely think about what makes life on this side of the window worth living—or whether the extra decade or so in the nursing home bought for us by our health-obsessed, pill-popping culture is really something to be desired.

Scruton’s understanding of politics also begins with the recognition that we must be content to live together in the world that exists, rather than hope to construct an ideal one. That starts with the pre-political commitments that make any sort of communal life possible. In contrast to collectivist understandings of the nation that unite subjects around a common ideology or submission to power, a healthy love of country springs from our attachments and obligations to the place and people around us. It is an instinctive recognition that we live in a particular place with particular people and that we benefit (materially and morally) when we live in peace and friendship with them, working out as a “we” the inevitable difficulties of communal life.

The laws, constitutions, traditions, and institutions that comprise the conservative dogma gain their political legitimacy, and earn the instinctive love and respect of average citizens, because they are the “residue of human agreements,” meeting the needs of a particular society in a particular place. He contrasts this with the universality both of sharia law and of certain conceptions of natural law that would demand the positive law conform exactly to some universal model. Government so conceived “grows from within the community as an expression of the affections and interests that unite it.” It expresses “in symbolic and authoritative forms . . . our deep accountability to each other.”

Scruton defends such a position against the view that government is always an imposition from the outside—“a system of power and domination” that cuts across and through our civil associations to establish this or that conception of the good society. Once we come to see government in that manner, we are inclined either to go to any lengths to put it in our own hands, or to despise it utterly. Neither is healthy.

Scruton thus counseled a course correction for a certain brand of conservatism too often tempted to embrace Ayn Rand or Tom Paine. Common life together, and a government that springs up from below to preserve and regulate that life are not bad things. When the salutary suspicion of concentrated power gives way to a radical individualism, or even a loathing of any communal authority, it can distort our understanding of human life. Leave me alone so I can live in my world and you can live in yours: this is a manifestation of the modern discontent with the limits attached to life with others—a rejection of the communal “we.”

Nevertheless, Scruton was clear that, in our present circumstances, the problem is far more often one of too much government than too little. He saw that most of the social ills we face cannot be reversed with the correct government policy. Today, government too often conceives of itself as the ultimate moral authority, responsible for ensuring that all social outcomes are just. This view seems to validate a government authorized to run society from the top and to intrude into every detail of life. In reality, such a state winds up losing the more fundamental source of legitimacy that all governments must have: Good government must be our own. It must reflect our life together, not just the aims of whatever group holds power.

Scruton was certainly a culture warrior, but he realized that we cannot simply impose opinions and values on a citizenry that does not share them. He realized that cultural revitalization must come by changing people’s minds and habits—primarily a matter for education. This brand of culture war is reflected in his advice to those who deplore the soul-rotting squalor that we call popular culture:

Scruton’s conception of politics and culture war certainly remains relevant to the debates raging in conservative intellectual circles today, offering correctives to the extremes of all sides of that quarrel. He can especially remind us that a sense of communal belonging does not go hand-in-hand with the concentrated power of a paternal state.

Living together as a “we” means finding ways to deal with the messy realities of the life around us—including each other—without the appeal to an outside power to come in and set things straight. Conservatives champion the old ways of citizenship under law, free association, and respect for tradition because they have shaped and been shaped by this quintessentially human undertaking. They are our own “ways of peaceful association” that mold us as moral beings and free us to appreciate the higher joys that this life offers us.

“I have seen the business that God has given to the children of man to be busy with. He has made everything beautiful in its time. Also, he has put eternity into man’s heart, yet so that he cannot find out what God has done from the beginning to the end. I perceived that there is nothing better for them than to be joyful and to do good as long as they live.” Thus proclaims the book of Ecclesiastes. Scruton’s essays in Confessions reflect this wisdom.

We may wonder at and hope for the pure, transcendent truth, order, and beauty that exists in the great realm of creation on the other side—the “larger and redeeming whole” of which our existence is but a part. But we also must learn to live inside the window. So, as Scruton posited, we have a choice: “We can wander through this world, alienated, resentful, full of suspicion and distrust. Or we can find our home here, coming to rest in harmony with others and with ourselves.”

Veteran sues after being arrested for holding ‘God