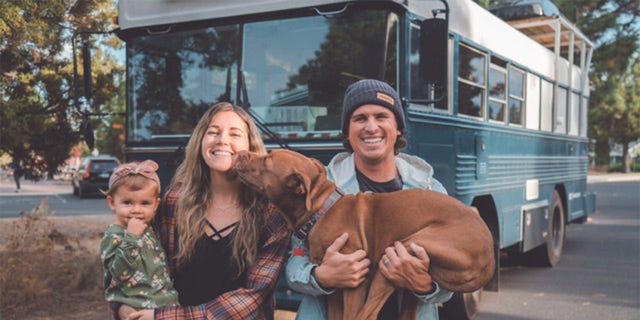 Memorial Day weekend is upon us and if you’re heading out on a road trip, you don’t have to leave Fido behind.

It may seem like an added challenge to have a dog with you in the car, but according to Will and Kristin Watson, it’s all worth it.

The Watsons, along with their 3-year-old daughter Roam and their 10-year-old pit bull Rush, have been traveling in a renovated bus since April 2019.

“I would not want to do this without Rush,” Kristin told Fox News Digital. “I know some people don’t bring their dogs along, because they don’t think that their dog would be able to handle it, but I would say just try and see before you just don’t give your dog the opportunity.”

“Most dogs really just want to be with their owners in any way that they can, so they adapt,” Kristin added. “And they’re just the best companions to have on these kinds of trips.”

When the family moved onto the bus three years ago, Kristin said Rush took a little time to adjust to the lifestyle change, though he was a little anxious early on.

Will explained: “He was having a hard time protecting us when we’re driving on the road.”

Now, the Watsons give Rush some CBD for dogs before they hit the road.

“That has really, really helped mellow him out and be able to chill while we’re driving,” Kristin said. “It also helps great with his hips, because he’s getting older. So hopping in and out of the bus, he can do it so much better since we started giving him that.”

HOW TO ROAD TRIP WITH KIDS, FROM PARENTS WHO LIVE IN A BUS YEAR-ROUND

Though the Watsons don’t crate Rush on the bus, he does have two spots where he spends most of his time.

Giving your dog a spot in the car – or bus – helps make your pet feel calmer and at home while on the road, according to Outside magazine.

When the Watsons first moved onto the bus, Kristin said Rush handled the transition pretty well.
(Will and Kristin Watson)

In the Watsons’ bus, Rush spends his time either in the front with Will while he drives, or in the back on the bed.

“He loves to just stick his head out the window of the back and just smell the new smells,” Will said.

The Watsons also leave all the essentials out for Rush, so he has access to them while they’re on the road.

“He free-range eats and everything, so he has food and water available and his toys available any time he wants them,” Kristin said.

The Watsons also make sure to walk Rush every time they stop – which they do every few hours to stretch their legs and take bathroom breaks.

Two of the greatest benefits of having Rush with the Watsons on the road are security and companionship.

“If Will has to leave me and Roam behind to go on a work trip, I feel super safe because I have my dog,” Kristin said. “He’s one of those dogs that, he’s only going to bark if there’s someone sniffing around the bus or something. So he’s an alarm system.”

Though Rush was a little anxious about being on the bus at first, the Watsons started giving him CBD for dogs, which has calmed him down and helped with his joint pain as he’s gotten older.
(Will and Kristin Watson)

“He’s very friendly, but he sounds like he will bite your head off if you come around the bus,” Kristin added.

Plus, Rush loves to go on adventures.

“He loves that we go to different places all the time because he gets to smell new smells and pee on different things,” Will said.

“If we want to get out and just walk a trail or go do something, obviously Rush is always going to come and he just loves it,” he added.

One of the biggest challenges of having Rush along for family getaways is that some areas aren’t pet-friendly, Kristin said.

“If you’re going to national parks, most of the trails in national parks aren’t dog friendly,” Kristin explained. “So you really have to be mindful of the weather, because if you’re going to be leaving your dog or any animal behind in the summertime, you need to do things really early in the morning or in the evenings when it will be cooler.”

The Watsons said that having Rush with them gives them an extra layer of security, plus Rush likes to adventure as much as they do.
(Will and Kristin Watson)

The Watsons have a pet monitor, which measures the temperature and humidity levels in their bus and sends them alerts to their phones in case their AC shuts off.

They also have a security system for the bus, so they can watch and talk to Rush, while they’re away.

An added challenge for the Watsons is that Rush is a pit bull, so he’s not allowed at some campgrounds.

“They consider him an aggressive breed, unfortunately,” Will said.

The Watsons said they lean on a website called BringFido, which helps them find dog-friendly restaurants, activities and accommodations while they travel.

Kristin added that public lands are also some of the best places to take your dog.

“I would not want to do this without Rush,” Kristin told Fox News Digital about traveling and living in a bus.
(Will and Kristin Watson)

“They’re the places with the least amount of rules,” she said. “You’ll find beautiful wide-open spaces there for your dog to run around and stuff. So we always try to find public land places.”

Despite the few challenges, the Watsons have no regrets about bringing Rush on their travels.

“Bring the dog,” Kristin said. “Never leave the dog behind.”

McCarthy takes on press after House kicks Ilhan Omar of