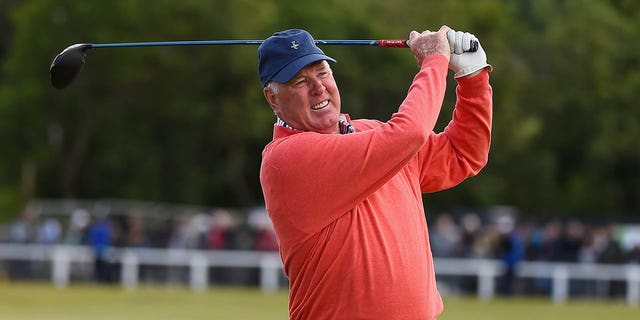 Tom Weiskopf, a 16-time winner on the PGA Tour and 1973 Open Championship winner, died at his home in Montana on Saturday, his wife said. He was 79.

Weiskopf was diagnosed with pancreatic cancer in December 2020. Laurie Weiskopf said her husband was working last week at The Club at Spanish Peaks and attended a legacy luncheon at the signature club where he was designing “The Legacy: Tom’s Ten,” a collection of his 10 favorite par 3s.

Tom Weiskopf during the Champion Golfers’ Challenge ahead of the 144th Open on July 15, 2015, in St Andrews, Scotland.
(Ian Walton/R&A via Getty Images)

“He worked to the end. It was amazing. He had a big life,” she said.

Weiskopf was equally known for the major tournaments he didn’t win. He finished runner-up at the Masters four times – the most for any player who hasn’t won a green jacket. In 1975, he and Johnny Miller watched Jack Nicklaus masterfully sink a 40-foot birdie.

In a Golf Digest interview in 2008, he said of Nicklaus: “Going head to head against Jack Nicklaus in a major was like trying to drain the Pacific Ocean with a teacup. You stand on the first tee knowing that your very best golf might not be good enough.”

Tom Weiskopf in action at the 2004 British Open.
(Tony Marshall/EMPICS via Getty Images)

He topped Miller, Nicklaus and Neil Coles in 1973 for the British Open win. He was 12-under par for the tournament.

RORY MCILROY ON TIGER WOODS’ ‘IMPACTFUL’ PRESENCE AT PGA TOUR PLAYERS’ MEETING: ‘IT SHOWS HOW MUCH HE CARES’

Weiskopf was also known for his architecture chops. He partnered with Jay Moorish on the Troon Country Club in Scottsdale, Arizona, in 1986, and it was named one of the best new courses by Golf Digest. He and Moorish worked on 25 courses together.

He worked on about 80 courses, including Loch Lomond in Scotland, and helped renovate the North Course at Torrey Pines.

Tom Weiskopf wedges from the first green during the Memorial Tournament at Muirfield Village Golf Club in Dublin, Ohio, on May 24, 1980.
(AP Photo/File)

“I should have done more,” he once told Golf Digest of his career. “But I don’t dwell on it anymore. I will say this, though: If it wasn’t for the fact that I love so much what I’m doing now (golf course design), I would probably be a very unhappy person.”

Of his 16 PGA Tour wins, three came at the Kemper Open and two at the Canadian Open and the IVB Philadelphia Golf Classic. He also won at the Benson & Hedges International Open on the European Tour in 1981. He won the U.S. Senior Open in 1995 over Nicklaus by four strokes.