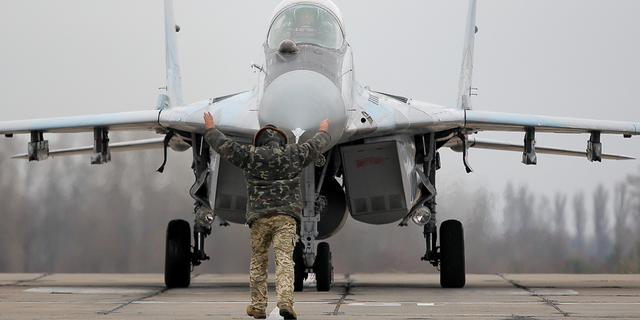 EXCLUSIVE: Two Ukrainian air force fighter pilots traveled from the front lines in the war against Russia to Washington, D.C. this week to press Congress on the importance of supplying them with urgently needed equipment, including fourth-generation warplanes.

The two pilots, who were identified only by their call signs “Juice” and “Moonfish” for their protection, told Fox News they sat down with lawmakers in a closed-door meeting Thursday to detail what is needed in the immediate and intermediary sense.

“They’re sending their attack jets and helicopters at low altitudes through the front lines to attack our war-fighters in the trenches,” Juice explained. “We need to react, we need to intercept them. We need to save the lives of our citizens and ground troops.”

ZELENSKYY PLEADS WITH US, POLAND TO SEND MIG-29 PLANES, DEFENSE OFFICIALS WARN THIS IS EASIER SAID THAN DONE

A ground staffer directs a Ukrainian Air Force MiG-29 fighter jet during a training session in a military airbase outside of Kyiv in November 2016.
(Photo by Danil Shamkin/NurPhoto via Getty Images)

Juice, whose squadron gained notoriety in the early days of the war as they took to the sky to defend Kyiv, said air defense is the number one priority for Ukraine’s fighters.

The pilots said first and foremost, Ukrainian fighters on the ground and in the sky need more advanced surveillance and response systems to counter and detect the barrage of Russian missile fire.

The pair listed a range of defenses they spoke to lawmakers about, though Fox News has withheld details of the systems at the request of officials involved with the talks.

The U.S. has supplied Ukraine with an array of heavy artillery like Howitzer, Javelins and Stinger missiles to help resistance fighters fend off Russian advances, but Juice said this is not enough.

Ukrainian leaders have pleaded with the U.S. and other NATO nations for months to supply them with modern warplanes, including F-16s or F-15s.

The Biden administration has refused to send Ukraine warplanes over concerns it would escalate tensions with Russia.

However, as the war continues for a fourth month and billions of dollars in U.S. defensive aid continues to pour into Ukraine, fighters on the front lines argue warplanes are also needed to adequately take on Russia and end the costly war.

“I believe they should have the weapons systems that they believe they need to win,” he told Fox News. “And it’s not terribly useful for us to be second-guessing that.”

Sullivan, who called the meeting “powerful,” said senators will not only work to ensure Kyiv gets what it needs in the immediate sense, but said they will also “press the case” with the administration and Pentagon when it comes to supplying Ukrainian soldiers with modern warplanes.

“These guys came off the frontlines. And they’re going back. They’ll be fighting probably Monday,” he said. “It adds a little more poignancy and credibility to what they’re seeking.”

Ukrainian pilots have relied heavily on Soviet-era MiG-29 warplanes, but the dated aircraft do not have the technological advances needed in modern warfare.

“If you are engaging with a Russian fighter, face-to-face fight, I wouldn’t even find him on the radar screen [by the time] he’s already launched a missile,” Juice explained. “It’s almost a suicide mission to intercept them.”

Despite the immense danger, Juice, Moonfish and their fellow pilots face in the cockpit, they continue to return to the sky to engage with Russian sorties.

“The modern area of war is a war of numbers, of distances, of ranges, of kill ratios and our kill ratio is not enough to be effective,” he added. “Our air defense and ground defense have proven capable and effective against them. That’s why they’ve suffered great losses from the start of this war.

“But our ground defense is not able to cover all the country, it’s not so mobile as fighter jets. You need both,” Juice urged.

The morning read for Wednesday, Aug. 10