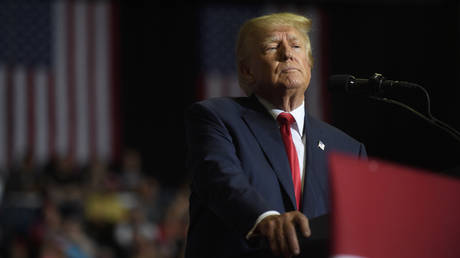 The ex-president is challenging an August raid on his home by the FBI, which has accused him of taking classified materials

Former US President Donald Trump has called on the Supreme Court to evaluate a tranche of documents seized from his home by federal law enforcement, hoping to reverse a ruling by a lower judge which denied any independent review of the allegedly classified papers.

Trump filed an emergency appeal in the nation’s highest court on Tuesday, asking justices to overturn a recent decision by a federal appeals court, which insisted the documents in question are, in fact, classified and belong to the government, rather than a former commander in chief.

“Any limit on the comprehensive and transparent review of materials seized in the extraordinary raid of a president’s home erodes public confidence in our system of justice,” attorneys wrote in the filing, adding that “the government has attempted to criminalize a document management dispute and now vehemently objects to a transparent process that provides much-needed oversight.”

Trump’s legal team argued that an independent review is needed for 100 documents seized from his home during an August 8 FBI raid, saying a specially designated judicial official should “determine whether documents bearing classification markings are in fact classified.” The ex-president maintains that he declassified the materials before leaving the White House, even some documents bearing ‘Top Secret’ markings, though the Justice Department has claimed some of the papers contain highly sensitive information.

Should justices take up Trump’s request, the documents will undergo analysis, though the former POTUS did not ask the court to reinstate a prior ruling which said the DOJ could not use the allegedly classified docs as part of a criminal probe into his actions after leaving office. He instead urged the court to simply return the documents to Special Master Raymond Dearie, a third-party judge who was previously tapped to review the papers.

Supreme Court Justice Clarence Thomas later ordered the Justice Department to respond to Trump’s emergency filing by next Tuesday, though the court itself has no hard deadline for when it must reply to the appeal.

Bible verse of the day: Our sufferings strengthen us,