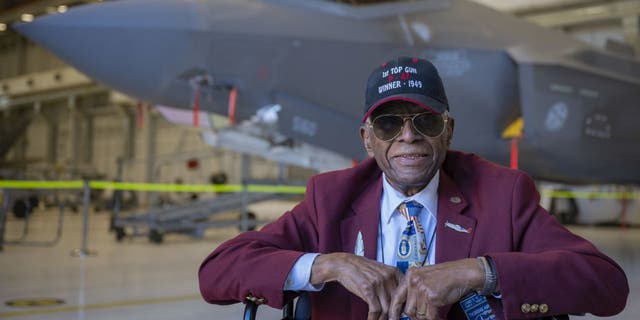 Out of all the things Lt. Col. James H. Harvey III could have asked for in life, all he wanted was recognition for a military win that went ignored during his time of service.

Wish of a Lifetime from AARP stepped up to help the 98-year-old war veteran get that recognition he and his teammates deserved for their history-making Air Force “Top Gun” win from 1949.

BLACK FEMALE NAVY COMMANDER FLIES IN THE FACE OF DANGER: SERVING ‘WAS THE RIGHT CHOICE’

He continued, “And they were to pick their three high scorers to represent air fighters [at the] first-ever ‘Top Gun’ weapons meet to be held in June of 1949 at the Las Vegas Air Force Base, which is now Nellis.”

Lt. Col. James H. Harvey III told Wish of a Lifetime from AARP that he’d like to get his 1949 ‘Top Gun’ win recognized at the Nellis Air Force Base in Las Vegas.
(U.S. Air Force)

Harvey recalls feeling “good” when he was “chosen as one of the members” for the Air Force’s inaugural Top Gun competition.

On competition day, Harvey, Temple and Stewart were tested on their aerial skills. The trio completed complex maneuvers with a D-47 aircraft, which was heavier than the other planes that were flown by their fellow competitors.

“It was obsolete, but it was still a good airplane,” Harvey said while noting that the 332nd Fighter Group made use of the D-47 since the aircraft hadn’t been used for its original purpose since World War II came to a close sooner than expected.

Their celebration was short-lived, however, because the trophy mysteriously disappeared after it was announced that the 332nd Fighter Group won. The Air Force Almanac, an annual magazine that highlights the military branch’s achievements and developments, listed the 1949 Top Gun winners as “unknown.”

AT CHRISTMAS AND ALL YEAR LONG, CODE OF VETS GIVES BACK TO VETERANS IN NEED

The record was corrected in 1993 when Stewart, Harvey’s teammate, presented documentation to the Air Force that proved the 332nd Fighter Group participated and won.

“Now it says 332nd Fighter Group, but that was 40-plus years later,” Harvey said.

In 2004, their Top Gun trophy was finally found in a storage location at the National Museum of the United States Air Force in Ohio by Zellie Rainey Orr, who was the president of Atlanta’s Tuskegee Airmen chapter, at the time﻿.

The trophy was put on display at the Nellis Air Force Base where it was first won all those years ago.

While Harvey was grateful for the trophy’s recovery, he wished the display had a recognition plaque for the 332nd Fighter Group’s contribution, and that’s exactly what he asked for when Wish of a Lifetime from AARP contacted him in April 2021.

Réjane Mcnamara, a wish fulfillment specialist within the unique AARP program, told Fox News Digital that she learned of Harvey’s story from the Tuskegee Airman chapter in Colorado.

Mcnamara and her team worked to organize a recognition ceremony where a plaque would be raised to acknowledge the 332nd Fighter Group as the Air Force’s first-ever weapons meet winner.

“Why was the win so important? Things weren’t too good back in those days,” Harvey told Fox News Digital. “Everything was segregated in a way. We as a race of people did not have the ability to do anything. And so we were out to prove that we could win this thing, and we did.”

Tom Wagenlander, executive director at Wish of a Lifetime from AARP, said the wish-fulfillment program is “honored” it had the chance to help Harvey.

“We are honored to have played a part in helping Lt. Col. James Harvey realize his lifelong dream and right this wrong after so many years,” Wagenlander wrote to Fox News Digital. “With his wish, and others like it, we hope to shift the way society views and values our oldest generations by fulfilling their dreams and sharing their stories to inspire those of all ages.”

Harvey said AARP “knew the right people” and he’s grateful to finally have his recognition.

When asked if he has any advice for someone who is trying to gain recognition for an overlooked achievement, Harvey said, “Don’t give up. Continue to pursue it. Do what you have to do to get the recognition that you deserve.”