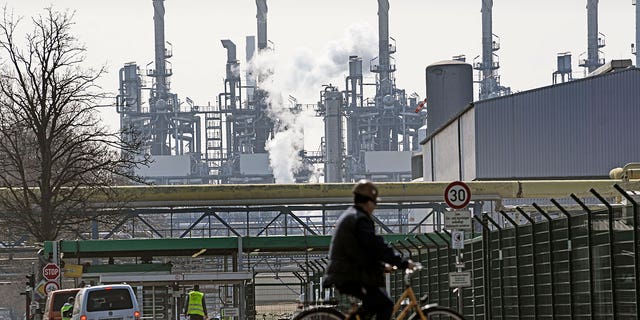 The U.S. and allies announced a rash of new sanctions against Russia on Sunday, targeting 2,600 Russian military officials, executives of the Russian bank Gazpombank, state-owned media outlets, and other individuals and businesses that the West believes are either party responsible or complicit in Putin’s invasion of Ukraine.

President Biden and other G-7 leaders met with Ukrainian President Volodymyr Zelenskyy on Sunday and promised to also phase out their dependence on Russian oil.

“We will ensure that we do so in a timely and orderly fashion, and in ways that provide time for the world to secure alternative supplies,” the leaders of the U.S., Britain, Canada, Germany, France, Italy, and Japan said in a joint statement.

More than two dozen executives from Gazpombank, which facilitates sales by Russia energy giant Gazprom, were hit by sanctions. The natural gas producer said Sunday that it was still supplying natural gas to European consumers through Ukraine.

A new ban on U.S. accounting and consulting firms doing business in Russia is meant to stop Russian oligarchs from evading sanctions and “generating revenue for Putin’s war machine,” the White House said.

“Preventing Russia from accessing the United States’ valuable professional services increases the pressure on the Kremlin and cuts off its ability to evade sanctions imposed by the United States and our partners,” Treasury Secretary Janet Yellen said in a statement.

Visa restrictions were imposed on about 2,600 Russian and Belarusian military leaders and other officials who have been involved in the invasion of Ukraine.

ZELENSKYY TO FOX S: RUSSIA IS ‘FOLLOWING THE CONCEPT OF GOEBBELS’ WITH HITLER COMPARISON

While the U.S. and allies continue ramping up the pressure on Russia’s economy through sanctions, the Biden administration also announced an additional $150 million security assistance package to Ukraine this weekend, which will include 25,000 155mm artillery rounds, 3 AN/TPQ-36 counter-artillery radars, and other military equipment.

Russian President Vladimir Putin meets with his Belarus’ counterpart Alexander Lukashenko at the Kremlin in Moscow on March 11.
(MIKHAIL KLIMENTYEV/SPUTNIK/AFP via Getty Images)

President Biden is urging Congress to also approve $33 billion worth of military and economic aid for Ukraine that he requested this week.

The new round of sanctions comes before Russia’s May 9 Victory Day, when the country celebrates the defeat of Nazi Germany and the end of World War II.

Portuguese angered at influx of Californians who import