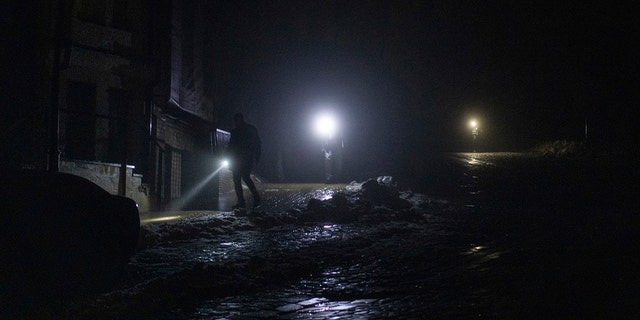 The Ukrainian capital city of Kyiv is in survival mode after a brutal series of Russian aerial attacks left most citizens without power, drinkable water, or both.

About 70% of the city was left without power on Thursday morning after Russia’s latest missile barrage, officials said.

Ukrainian President Volodymyr Zelenskyy said Thursday the restoration process in the capital and other affected areas continues and that officials are focused on “gradually restoring electricity, heat, water supply and communication.”

“The most difficult situation is in the Kyiv, Kirovohrad, Dnipropetrovsk, Lviv, Poltava and Kharkiv regions. But together with the supply of electricity to critical infrastructure, we also provide water and heat supply,” Zelenskyy said during his nightly address.

“Every hour we restore power to new consumers,” he said. “Energy workers, utility workers, business – everyone is doing their part to give light again. This is truly a nationwide task – Ukraine is working as unitedly as possible in this.”

Residents have been forced to find shelter and warmth where they can, including restaurants and facilities that emerged unscathed from the attack.

Oleksiy Rashchupkin, a 39-year-old Kyiv resident, said he lost power in the attack but was able to find a cafe that was open with electricity.

“I’m here because there is heating, coffee and light,” he told the Associated Press. “Here is life.”

In Kyiv, where some residents were forced to use pails to collect drinkable rainwater, the upcoming winter months bring a whole new challenge — but their resolve is unquestioned.

“Nobody will compromise their will and principles just for electricity,” said Alina Dubeiko, 34, who was also without electricity, heating and water at home.

While the Russian invasion crossed the nine-month mark on Thursday, Dubeiko said she would rather remain without power than have to live under Russia’s rule.

“Without light or you [Putin]? Without you,” she said, echoing comments Zelenskky made on Oct. 10, when the missile barrages began.

While Kyiv is rebounding, other cities, especially Kherson, suffered the heaviest bombardment since Ukrainian forces recaptured it two weeks ago.

“At night, Russian monsters launched huge rockets at the small maternity ward of the hospital in Vilniansk. Grief overwhelms our hearts – a baby was killed who had just seen the light of day. Rescuers are working at the site,” Gov. Oleksandr Starukh said on Telegram Thursday.

Russia’s attacks continue to cause nationwide blackouts, although claims it is targeting key infrastructure that enables the Ukrainian military. Ukrainian officials, however, say Russia’s attacks have resulted in countless damage to civilian areas, including homes, roads, hospitals, and schools.