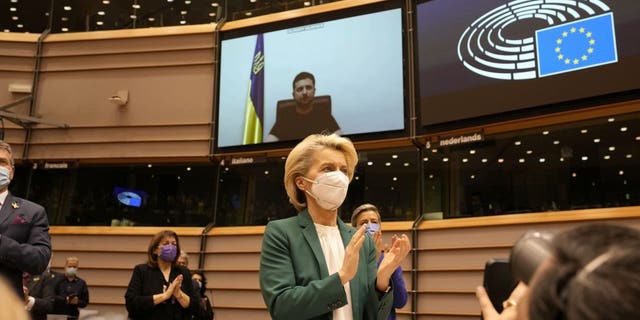 Ukraine on Friday got the green light from the executive arm of the European Union after it recommended the war-torn nation be granted “candidate status” as Kyiv seeks to join the 27-nation alliance.

President of the European Commission Ursula von der Leyen said, “Ukraine has clearly shown commitment to live up to European values and standards. And embarked, before the war, on its way towards the EU.

“We recommend to give Ukraine the candidate status, on the understanding that the country will carry out a number of important reforms,” she added.

The top EU official said Ukraine had already implemented 70 percent of EU “rules, norms and standards” but noted that Kyiv had some more work to do when it comes to “the rule of law, oligarchs, anti-corruption and fundamental rights.”

Leaders from the 27-nation bloc are set to discuss the president’s recommendation next week in Brussels during a summit.

Ukraine, along with Moldova and Georgia formally requested to join the EU just days after Russia invaded the former Soviet republic with the intention of taking over its eastern and southern regions.

European Commission head Ursula von der Leyen, right, and Poland’s President Andrzej Duda ,center, watching Ukraine’s President Volodymyr Zelenskyy on a screen at the main event of the “Stand Up for Ukraine” global campaign for pledging funds for Ukraine and its refugees, at the Palace on the Water, in Warsaw, Poland, on Saturday, April 9, 2022.
(AP Photo/Czarek Sokolowski)

SYRIA TO BECOME FIRST TO RECOGNIZE DONETSK, LUHANSK ‘REPUBLICS’ IN UKRAINE IN SUPPORT OF RUSSIA’S WAR

Moldova, which has also had direct threats levied at it by Moscow, was additionally recommended “candidate status” by von der Leyen on Friday.

“Moldova is on a real pro-reform, anti-corruption and European path. It still has a long way to go. But we believe it has the potential to live up to the criteria,” she said Friday.

Georgia was not recommended to be given candidate status and instead, the EU head advised them to devise a plan that shows a “clear path towards structural reform.”

Three of the largest EU powers, including France, Germany and Italy, have all shown their solidarity with Kyiv and visited Ukrainian President Volodymyr Zelenskyy Thursday.

Though Ukraine appears to have broad support for joining the EU, it remains unclear how quickly it could actually be brought into the alliance’s folds.

“Ukrainians are ready to die for the European perspective,” von der Leyen said Friday. “We want them to live with us the European dream.”