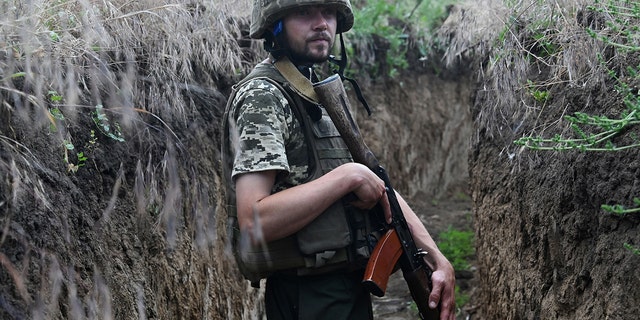 Elina Konavalyuk and her family had a relaxed if not indifferent attitude towards Russia before all this.  Some family members had even felt a bit nostalgic for the USSR over the years.  But no more. Not after living under attack by Russian soldiers who occupied the Kherson region of Ukraine early in the war, sleeping months, frightened, in a basement and Konavalyuk, her mother and grandparents finally making a dangerous escape from their homeland.

A Ukrainian serviceman Petro, 32, walks in a trench on a position held by the Ukrainian army between southern cities of Mykolaiv and Kherson on June 12, 2022, amid the Russian invasion of Ukraine.
(Genya Savilov/AFP via Getty Images)

“It was a fight for survival,” she said about living under Russian occupation last winter, something she had never imagined could happen to her or anyone she knew. The port city of Kherson, just north of Crimea, was the first major city to fall to the Russians in their 2022 war.  “I don’t have that adrenaline right now. Then all my thoughts were just about standing in line for six hours for a slice of bread. You would see your neighbors’ corpses lying outside your house. It was both mentally and physically so hard because you needed to acquire new skills just to survive.”

Last winter and spring, I posted some of what Konavalyuk shared with me during her time underground, never using her name out of fear for her safety.  And in fact, she says Russian border guards checked her phone and interrogated her intensely on the way out, suspicious as they are of each fleeing Ukrainian. Her “Diary of Survival” memoirs read like poetry with descriptions of what it feels like to forget the smell of fresh laundry and the taste of jam.

A fisherman watches smoke rise after Russian forces launched a missile attack on a military unit in the Vyshhorod district on the outskirts of Kyiv, Ukraine, Thursday, July 28, 2022.
(AP Photo/David Goldman)

Konavalyuk is a journalism student. Documenting what was going on in her hometown and teaching herself what blasts correspond to what sort of weapons fire in order to know when to run, how to react to the constant noise and bombardment all around her, she says, helped her get through the long and terrifying months. Now, in the safety of Europe, she finds it hard sometimes, she says, to see people enjoying the worry-free life of those who are not living in a state of war.

And Friday was a particularly somber day for people like Konavalyuk who hail from the Ukrainian territories Russia just declared its own, annexing Kherson and three other regions that together account for fifteen percent of Ukraine’s territory. The formal annexation followed what has widely been called illegitimate referendums.

“People were forced to vote at gunpoint, rounded up on the street. They came to their homes and threatened them,” Konavalyuk said. “So it’s very easy to refute this referendum.” Russian President Vladimir Putin, speaking in the Kremlin’s chandeliered Georgievski Hall whose shining parquet floors seemed in striking contrast to the grim-faced government officials who filled the room, said Russia would never give those territories back. Konavalyuk has a different view, that Ukraine will get its land back, but she says, the “fact that this will now be considered an attack on Russia complicates things,” she says. “It will be more difficult for us to get back the Kherson region and the rest of the occupied territories.”

When I ask who will do the fighting, who will get Kherson back, she says, “Different Ukrainians from different parts are fighting for Kherson. The most incredible thing for me is that Ukraine is now more united than before. There’s no difference at all right now—if you’re from the South or from the West. In other words, we are united as one people in returning our lands. We are also one people.”

Amy Kellogg currently serves as a correspondent based in Milan. She joined FOX News Channel (FNC) in 1999 as a Moscow-based correspondent. Follow her on Twitter: @amykelloggfox

Deadly: Dont go too Fast – Off Psych Meds Use Doctor

Colts’ clock management comes under fire in loss to