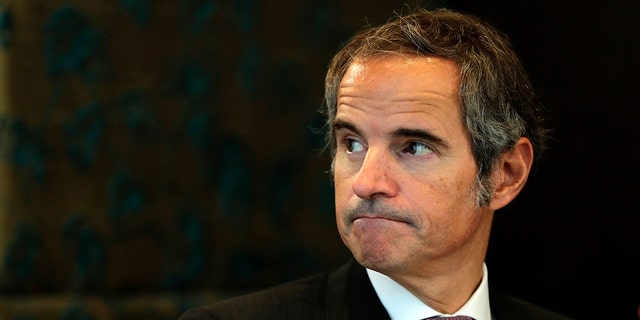 The threat facing Ukraine’s Zaporizhzhia nuclear power plant continues to mount as it was struck at least five times Thursday in a series of missile strikes.

It remains unclear who was responsible for the strikes and both Ukraine and Russia have pointed the blame on one another.

The United Nations nuclear watchdog, the International Atomic Energy Agency (IAEA), said in a U.N. Security Council meeting late Thursday that this is a “grave hour” for not only Ukraine’s security but Europe’s.

Areas near where the plant’s radioactive materials are stored have also come under threat warned Ukraine’s nuclear power agency Energoatom, according to Reuters.

Grossi told the U.N. Security Council that he did not believe there was an “immediate threat” to the plant’s nuclear safety but warned “that could change at any moment.”

U.N. Secretary-General António Guterres has called for the complete demilitarization of the nuclear site.

A Russian serviceman stands guard the territory outside the second reactor of the Zaporizhzhia Nuclear Power Station in Energodar on May 1, 2022.
(Photo by ANDREY BORODULIN/AFP via Getty Images)

The plant has been under the control of Russian troops since March, but its operations continue to be monitored and carried out by Ukrainian officials.

The Russian delegation on Thursday blamed Ukrainian forces of launching heavy artillery against the site during a shift change and pointed to Kyiv’s refusal to sign onto a trilateral agreement with IAEA.

Ukrainian officials have said that some 500 Russian soldiers have been posted at the nuclear site as a sort of “nuclear shield” as Moscow knows Ukraine will be hesitant to launch an attack in the direction of the nuclear plant.

Ukrainian President Volodymyr Zelenskyy warned Thursday during a defense meeting with world officials in Denmark that the fallout cause from damage to the Zaporizhzhia nuclear plant could be worse than Chernobyl.

“Only the complete withdrawal of Russians from the territory of the Zaporizhzhia nuclear power plant and the restoration of Ukraine’s full control over the situation around the plant will guarantee the restoration of nuclear safety for all of Europe,” Zelenskyy said in his nightly address.

“This is a global interest, not just a Ukrainian need,” he added.