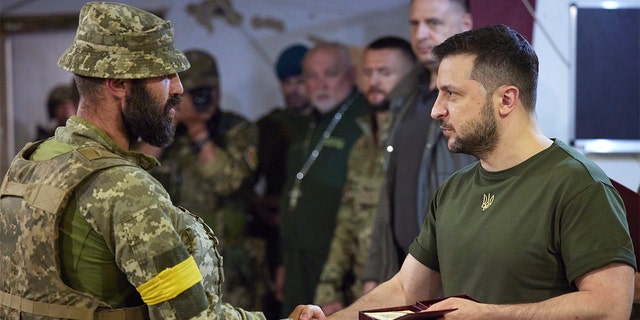 Ukrainian President Volodymyr Zelenksyy visited frontline cities along the Black Sea Saturday to meet with soldiers and listen to operational updates in the area.

Zelenskyy donned his trademark khaki T-shirt as he handed out medals to soldiers fighting to keep Russian forces from invading the strategically vital port cities of Mykolaiv and Odessa.

Russian officials have said their aim is to gain full control over the eastern and southern regions of Ukraine.

PUTIN LAMBASTS US AS ACTING LIKE ‘GOD’S MESSENGER,’ CLAIMS WORLD ORDER IS CHANGING

While Russian forces have made gains in the east, Ukrainian troops have held them off from making the same advances along the Black Sea, so far.

Russia has made attempts for Ukraine’s coastline since the invasion began nearly four months ago and the standoff that has since ensued in the Black Sea has created a global food crisis as grain exports remain holed up in Ukrainian storage facilities.

Zelenskyy presented awards to officials with the Ministry of Internal Affairs in Odessa for their “heroic” service and told them their continued survival was paramount for Ukraine’s success.

“It is important that you are alive. As long as you live, there is a strong Ukrainian wall that protects our country,” he added.

While Ukrainian forces have held Russian troops at bay in the south, Moscow has made greater advances in the eastern Donbas region where a brutal fight ensues in the strategically important city of Sievierodonetsk.

Nearly 570 civilians remain holed up in a chemical plant in the western Luhansk city as Russian forces fight to gain complete control over it.

It is unclear how many Ukrainian troops remain inside the partially besieged city, but officials are concerned the brutal ground and air assault could be a repeat of the catastrophic events that plagued Mariupol earlier in the war.

Russian forces have destroyed the last remaining bridge that connected Sievierodonetsk with western parts of Ukraine as they try to assert dominance over the Luhansk and Donetsk regions.

If Russian forces are able to gain control over Sievierodonetsk, they can more easily push forces west into Ukraine and south to try and pinch the southern regions from a northern direction.

The United Kingdom’s defense ministry on Saturday said that “In the last 48 hours, Russia has likely renewed its efforts to advance south of Izium, with the goal of advancing deeper into the Donetsk Oblast, and to envelop the Sieverodonetsk Pocket from the north.”

Russian forces have claimed they are attempting to open up humanitarian corridors to allow civilians to leave, but Ukrainian and Western officials have warned this is yet another attempt to forcibly deport Ukrainians into Russia where some tens of thousands of Ukrainians have reportedly been sent.

“Options to leave the town are limited by the destruction of bridges, but Russia’s proposed route would take them towards the town of Svatova, deeper inside Russian-occupied territory,” the UK defense ministry said.

The ministry also warned that if trapped civilians do not use any corridor necessary to leave the city “Russia will likely claim justification in making less of a distinction between them and any Ukrainian military targets in the area.”

Come Join us in our live stream on the weekends

Biden set to ratify US support for Sweden and Finland