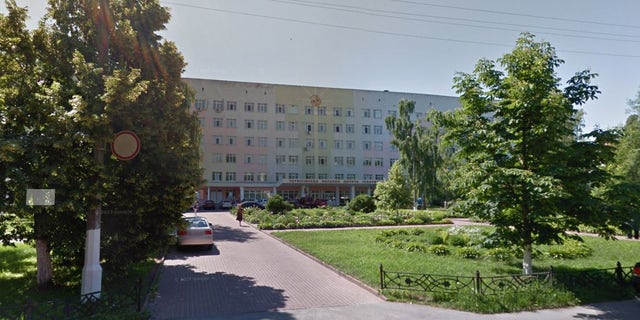 A Ukrainian children’s hospital in Chernihiv is pleading for the evacuation of its young cancer patients, as Russian forces surround the city, according to multiple reports.

At least 11 children are currently stuck in the oncology ward at Chernihiv Regional Children’s Hospital, with food and medicine becoming increasingly scarce.

“We don’t know how much time we have,” Serhiy Zosimenko, a charity worker supporting the patients, their doctors, and parents, told The Guardian. “We actually don’t know how to survive here — it’s unreal. We don’t have any more resources.”

The northern Ukrainian city, home to about 285,000 residents, sits about 43 miles from the Belarusian border and is surrounded by the Russian army on all sides. It is under siege, and two days ago, a rocket struck roughly 650 feet from the hospital, reports said.

A satellite image shows a blaze at warehouse “Epicentr K” and destroyed fields in Chernihiv, Ukraine February 28, 2022. BLACKSKY/Handout via REUTERS

Other hospitals in Poland and Slovakia have agreed to continue treatment and waive the fees for the children, who are between the ages of two and 15. But the only way out of the city would be on a helicopter.

Branches litter the street next to a damaged building after ongoing hostilties from the Russian invasion of Ukraine, in Chernihiv Feb. 27, 2022 in this social media video still image obtained on Feb. 28, 2022 by Reuters.

“The problem is we can’t evacuate the kids from the ground. We can only evacuate them by air,” Zosimenko said. “All routes to our city are mined.”

At least one of the children has Hodgkin’s lymphoma, while most of the other kids are reportedly leukemia patients. Despite local pharmacies and other shops donating to the hospital, Zosimenko said that items the children need, including painkillers, were in short supply.

“When people are sick with cancer, they need a lot of painkiller drugs, and we have a problem with morphine and other drugs,” Zosimenko said. “For example, the oncology hospital in Chernihiv, they have only eight ampules of morphine or other painkillers.”

At times, the children and people at the hospital have been forced to take refuge in a shelter when air raid sirens sound. Conditions in the shelter are not ideal for preventing sickness, so people were sleeping on the first floor and running down each time there was an air raid, The Guardian reported.

“Everyone is tired, especially the medical staff, they don’t sleep normally for the last week, just two or three hours,” Zosimenko said.

Holding out for hope, Zosimenko noted that hospital staff was working to keep the children’s spirits high and shield them from the conflict.

“We covered them from this as much as possible,” he told news outlets. “They understand what is going on, but they know they are not alone.”

Amber Heard ‘in talks’ to write tell-all book after