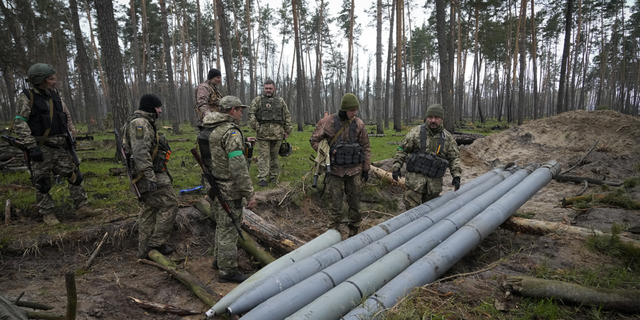 Ukraine’s defense ministry on Wednesday claimed Russia has used 60 percent of its high-precision weapons as its war in Ukraine rages on for the 13th week.

“According to our data, if we’re talking about high-precision weapons, about 60 percent of their stockpile has already been used,” Deputy Head of the ministry’s Chief Intelligence Directorate, Vadym Skibitskyi, said in an interview translated by a Ukrainian news outlet.

The official said Russia’s Iskander missile, a short-range ballistic missile system, was just one the weapons Moscow is having a hard time replenishing.

Severe international sanctions and a war that Western officials believe has already lasted far longer than Russia was prepared for have left Russia scrambling to replenish and repair its wartime needs.

Skibitskyi claimed Russia has changed its tactics and become more cautious over the number of missiles its fires at Ukrainian targets.

Russian forces are relying on a combination of ballistic, cruise, land, naval and air-based missile defenses in its battle for eastern and southern Ukraine.

Despite weeks of brutal warfare, Ukrainian President Volodymyr Zelenskyy warned this week that the fight for Ukraine’s survival will become even tougher as Moscow looks to secure a victory over Ukraine.

“The coming weeks of the war will be difficult. And we must be aware of that,” he said. “Yet we have no alternative but to fight. Fight and win.

“The occupiers want to take away from us…everything we have. Including the right to life for Ukrainians,” he added.

Zelenskyy said Russia is replenishing its fighting force by relying on reservists as death rates reportedly continue to rise.

Russian lawmakers also passed legislation Wednesday that will eliminate the existing age limit on those who can serve in the military. Men age 41 and older will be able to be conscripted into Russia’s ranks once President Vladimir Putin signs the bill.

But while Russian President Vladimir Putin is able to send in additional bodies, replacing its artillery appears to be another matter.

Russian service members march during a parade on Victory Day, which marks the 77th anniversary of the victory over Nazi Germany in World War Two, in Red Square in central Moscow, Russia May 9, 2022.
(REUTERS/Evgenia Novozhenina)

Zelenskyy said Russian forces have levied nearly 1,475 missile strikes by using 2,275 different missiles, along with another 3,000 airstrikes made by Russian aircraft.

“The vast majority…aimed at civilian objects,” he said.

Pro-lifers targeted over 40 times in attacks,