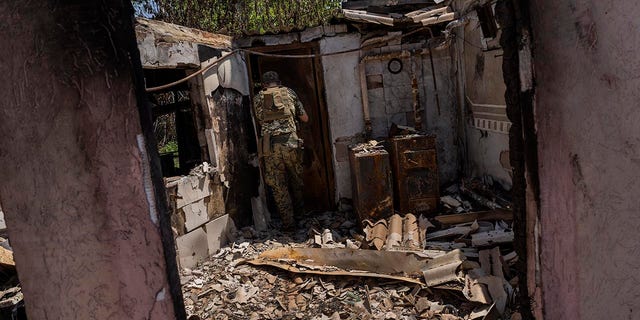 Ukrainian forces are retreating from the besieged eastern city of Sievierodonetsk after weeks of a fierce, bloody battle, Luhansk Gov. Serhiy Haidai said on Friday.

Russian troops have been relentlessly bombarding the city, which is the administrative center of the Luhansk region, and the Ukrainians are retreating to avoid encirclement.

Russia controls around 95% of the Luhansk province and around 50% of the neighboring Donetsk province. Both are in the disputed Donbas region.

Commander of an artillery unit of the Ukrainian army, Mykhailo Strebizh walks into a destroyed house due to shelling in a village near the frontline in the Donetsk oblast region, eastern Ukraine, Thursday, June 2, 2022.
(AP Photo/Bernat Armangue, File)

Haidai said the defenders will continue fighting from new positions after they retreat.

The Ukrainians had fought Russians on the streets of the city before holing up in a chemical factory.

In Mariupol, the last remaining Ukrainian fighters before the city was taken by Russia had hidden inside a steel plant before being removed and taken away as prisoners of war in May.

Russian soldiers guard an area at a captured Ukrainian checkpoint with well-fortified trenches near Schastia town, on the territory which is under the Government of the Luhansk People’s Republic control, eastern Ukraine, Saturday, June 11, 2022. This photo was taken during a trip organized by the Russian Ministry of Defense.
(AP)

Russian troops have made gains in Sievierodonetsk and neighboring Lysychansk as it wears down Ukraine’s resistance.

“We will have to pull back our guys,” Haidai said. “It makes no sense to stay at the destroyed positions, because the number of casualties in poorly fortified areas will grow every day.”

A woman gestures near an apartment building damaged during shelling in Donetsk, in territory under the government of the Donetsk People’s Republic, eastern Ukraine, Wednesday, June 22, 2022.
(AP Photo/Alexei Alexandrov)

US TO SEND $450M IN ROCKET SYSTEMS, OTHER AID TO UKRAINE: OFFICIALS

Haidai said the Russians were also advancing toward Lysychansk from Zolote and Toshkivka, adding that Russian reconnaissance units conducted forays on the city edges but were driven out by its defenders.

Russia invaded Ukraine in what it called a “special military operation” four months ago on Feb. 24 and has more recently shifted its focus to the Donbas region following its failure to capture the country’s capital, Kyiv.

U.S. and allied leaders have made visits to Kyiv to meet with Ukrainian President Volodymyr Zelenskyy in a show of support – the leaders of France, Italy, Germany and Poland visited last week – and the U.S. and its allies continue to support the country with military aid.

The Grid Is The Metaverse Of Madness Trailer

The Great Tribulation is Coming