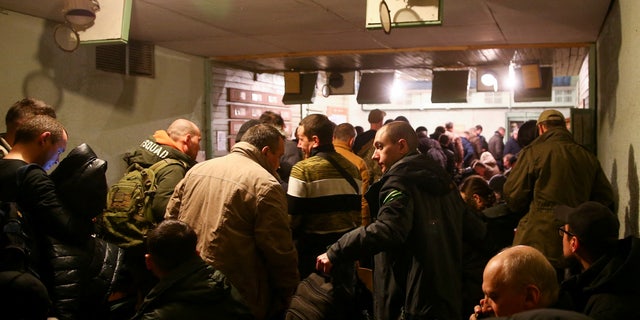 On the outskirts of Lviv, Ukraine, Nataliya Kuba and her family reside among the chaos of the Russia-Ukraine conflict, keeping alive their country’s relentless spirit of unity and tenacity in the face of an invasion.

As day four of Russia’s invasion of Ukraine unfolds, Ukrainian civilians remain determined to fight for their families, their homes and their freedoms.

In an interview with Fox News foreign correspondent Benjamin Hall that aired during a special weekend edition of ‘America’s Newsroom,‘ Sunday, Kuba – a mother, IT consultant and now coordinator of the civilian resistance against Russia – shared why she and her family are prepared to sacrifice as much as they can to preserve their way of life.

Volunteers wait in line to join the Ukrainian Armed Forces at a military commissariat in Kyiv, Ukraine February 24, 2022.  REUTERS/Viacheslav Ratynskyi

“We are united,” Kuba said of the Ukrainian people. “There is no government and people – just like separate groups of people – so we are united. We cooperate in any possible way.”

“We have over 40 million people who would like to fight Russia,” Kuba added. “Maybe they expect they will have the same thing they had in Crimea where we were in crisis and they come and they just take and everything was smooth for them. However, now, they are in hell…”

Kuba said that if Russian forces insist on taking Ukrainian land, their troops can expect to be buried in it.

When Hall asked Kuba if she believed a group of civilian resistors could overcome Russia’s army, she responded with enthusiasm.

“We have a tradition of resistance, like, a local resistance here,” she said.

Kuba said her future and the future of her children motivate her to rise up and do what she can to preserve her country. Kuba also says she is willing to sacrifice anything that is needed to win.

“This can cost us our lives,” she said. “However, we know this, and we are not terrified.”