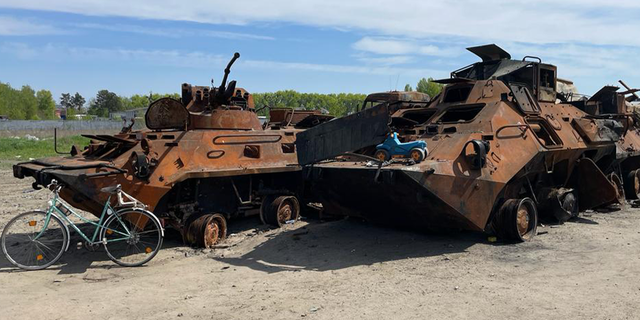 It was a pretty, small town outside Kyiv that turned into a comfortable modern commuting suburb of some 50,000. Now, the town of Bucha is synonymous with some of the worst horrors that have befallen Ukraine since the Russians launched their invasion.

Officials say over 450 residents were murdered in cold blood by Russian forces, and many more were injured. Others are terrorized and forced to live in basements to save their skins during the five-week Russian post-invasion occupation. A majority of the buildings were damaged, many destroyed.

The town of Bucha has become synonymous with some of the worst horrors that have befallen Ukraine since the Russians started their invasion.
(Fox News)

A bit more than five weeks later, the residents of Bucha are coming back, checking out their homes, repairing the damage and paving the artillery-pocked streets.

One informal market just outside the city center was abuzz when Fox News stopped by.

“I’m really happy to be back,” one customer said.

A stall owner explained, “This is our life, earning money, helping people.”

Yet the dark Russian deeds were not far away.

Asked how bad it was, another stall keeper explained she had to stay with her dogs and her cats.

“I have no words,” she said, breaking down in tears.

Outside city hall, there was a big group of locals. Services are back somewhat in the city, but a lot of jobs are gone, and food and essentials are short.

An 89-year-old woman said she was sheltering underground for two months.

She lived through the brutal World War II experience in Ukraine and said the invasion this year “was worse.”  She, too, could not hold back her emotions.

The town’s mayor, Anatoliy Fedoruk, who bravely appeared in a video in early March with much of Bucha up in flames, said he was determined to get the town back on its feet — at the very least to spite the Russians.

“It is our moral obligation to improve the city after all the atrocities,” he said.

The mass grave where victims of Russian killings were placed is now a smoothed-out patch of earth near the church in the center of town. The burned-out tanks and armored personnel carriers of the Russian army, which retreated in response to Ukrainian military bravery, are now piled up in a lot outside of town.

And the bodies that were strewn in one neighborhood dubbed the “Street of Horrors” have been given proper funerals.

One man there was seen repainting his front wall.

“Children inside” had been written in Russian to keep the troops away, but it didn’t work.

A resident of the street, Alexey Cherkashin, said the corpses were left as long as 20 days because it was too dangerous to recover them.

He remarked about the nice spring weather with flowers and trees in bloom. But, internally, the Ukrainians are damaged, especially as the war still rages elsewhere.

Many here can only hope.