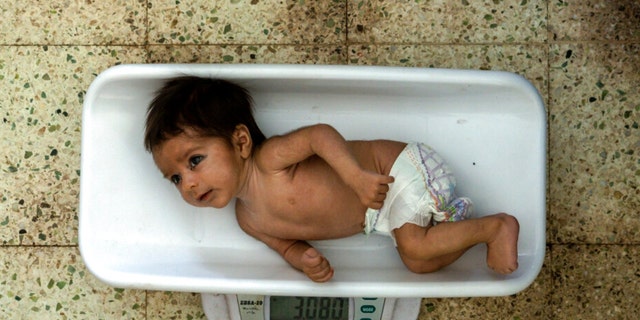 More than a million Afghan children under the age of 5 will likely face the most severe form of malnutrition this year, according to the United Nations (UN).

While the agency was able to help stave off outright famine after the Taliban takeover of the country in 2021, they are reportedly struggling to keep pace with worsening conditions.

Some 65% of the Afghan people are children and youth.

Poverty and rising prices mounting from the war in Ukraine are also a part of this reality, according to a UN assessment report issued in May.

In Afghanistan, 1.1 million children are expected to suffer from severe wasting – nearly double the number in 2018.

A malnourished baby is weighed at the Indira Gandhi hospital in Kabul, Afghanistan, Sunday, May 22, 2022. Some 1.1 million Afghan children under the age of five will face malnutrition by the end of the year, as hospitals wards are already packed with sick children.
(AP Photo/Ebrahim Noroozi)

Severe wasting occurs when children are too thin for their height, resulting in weakened immune systems.

It is the most immediate, visible and life-threatening form of malnutrition and at least 13.6 million children under five suffer from severe wasting globally. It accounts for 1 in 5 deaths among this age group worldwide.

“Even before the war in Ukraine placed a strain on food security worldwide, conflict, climate shocks and COVID-19 were already wreaking havoc on families’ ability to feed their children,” United Nations International Children’s Emergency Fund (UNICEF) Executive Director Catherine Russell said in a statement. “The world is rapidly becoming a virtual tinderbox of preventable child deaths and child suffering from wasting.”

The numbers of children under 5 being admitted into health facilities with severe acute malnutrition have climbed steadily.

Internationally, at least 2 in 3 severely wasted children already do not have access to the most effective treatment for wasting, ready-to-use therapeutic food (RUTF). The price of that treatment is anticipated to rise by up to 16% over the next six months because of the sharp rise in the cost of ingredients.

Persistent drought has been the main driver of food security, due to climate change, and is compounded by a lack of access to clean water and medical care.

While the number of people facing food insecurity fell from 22.8 million last year to 19.7 million in May, the IPC – a partnership among the UN and other agencies that assess food security – noted small reductions are “far from indicating a positive trend.”

An Afghan mother sits by her child’s bed at the malnutrition ward of the Indira Gandhi hospital in Kabul, Afghanistan, Sunday, May 22, 2022.
(AP Photo/Ebrahim Noroozi)

Alarmingly, aid for wasting is forecast to decline sharply in coming years.

The IPC said the proportion of those receiving food aid could plummet to just 8% over the next six months because only $601 million of the $4.4 billion needed has been received from the world community.

Just over $2 billion has been pledged.

UNICEF has opened around 1,000 treatment sites in Afghanistan where parents can bring their malnourished children.

“There is simply no reason why a child should suffer from severe wasting – not when we have the ability to prevent it. But there is precious little time to reignite a global effort to prevent, detect and treat malnutrition before a bad situation gets much, much worse,” said Russell.